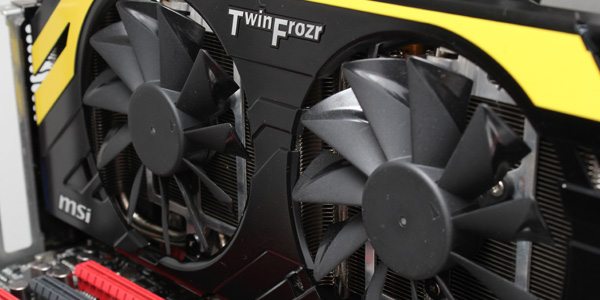 Recently we’ve seen more and more GeForce GTX 680’s cropping up on the market, especially in a custom way, in terms of factory overclocks and unique cooling solutions, and now we see MSI doing the same, but on an extreme scale. Computex 2012 showed us a first glimpse at the Lightning series with the 7970 and now the flagship single core Nvidia card; the GTX 680.

Today the GTX 680 Lightning landed with us, offering a custom cooling solution and a factory overclock aimed at overclockers and enthusiasts alike with a custom PCB, Twin Frozr IV cooler and some extra added bonus features. The lightning series are considered the best of the best, and aren’t for the faint hearted, especially with a £530 price tag, but if you want the most powerful single core card in the world, you have to pay the price and that’s who this card is aimed at.

Before we jump straight in and see how this beast performs, we need to take a look at the packaging and added accessories that MSI include. Afterwards, we can take a closer look at this mammoth of a card including its overclocked specifications and unique features.

Once that’s out of the way, we can delve further in and see how the card performs, with a key focus on how it compares to other overclocked cards we’ve tested.