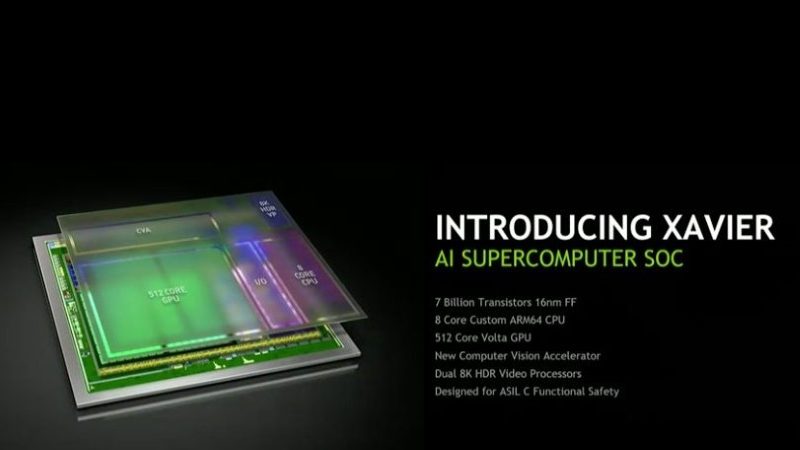 Nvidia’s CEO, Jen-Hsun Huang, announced a new system on chip (SoC) named Xavier today at GTC 2016. Xavier manages to pack in a whopping 7 billion transistors which comprise a custom octa-core ARM64 CPU and a next generation 512 core Volta GPU. This also makes Xavier the first device to employ the Volta architecture which is an unusual place for the upcoming GPU architecture to debut.

Xavier is designed as the successor to Nvidia’s previous DRIVE PX 2 module for autonomous vehicles, although Xavier manages to roll all of the computational power of onto a single SoC. While DRIVE PX 2 employs two Pascal GPUs, Xavier even offers improved performance in an integer test (160 SPECint), which is around a 33% increase over the DRIVE PX 2. This new system would also be able to handle 20 trillion calculations per second with a TDP of just 20W, impressive when compared to the DRIVE PX 2’s 80W. In reality, this allows Xavier to speed up current self-driving processes and even handle dual 8K HDR video streams which Nvidia are calling a “new computer vision accelerator.”

The release of Xavier is still a long way off, with Nvidia expecting a release before the end of next year, meaning that any real implementations of the system will likely only start to appear in 2018. Despite this, it’ll be interesting to see how this system develops and might provide some insight into just what Volta is capable of when it is formally announced.