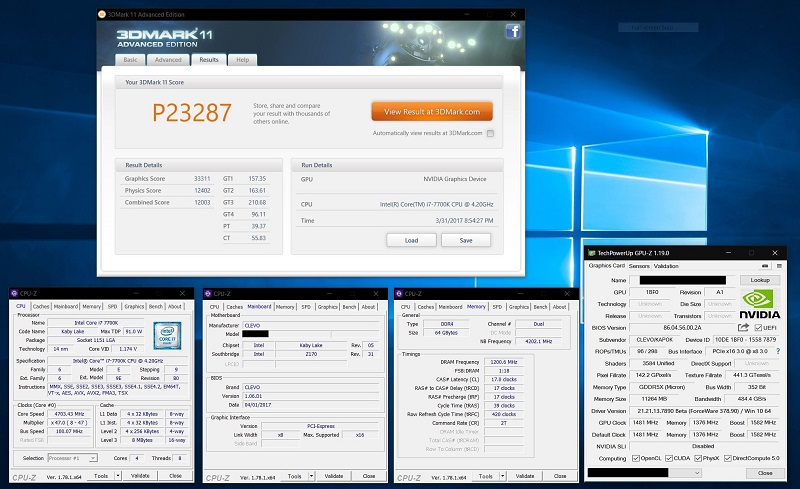 With every new iteration of GeForce graphics cards, Nvidia has always pushed the limits of what is available for the mobility lineup. In previous generations, only the midrange GPUs like the Gx104 GTX 780M and 980M were available for mobile users. Even the GTX 1080M did not utilize the largest GeForce die, the GP102, and instead used the same GP104. This is all set to change if this latest report of a GTX 1080 Ti in a MXM form factor.

According to the screenshot, we have what appears to be a full-fledged GTX 1080 Ti in a laptop. This Clevo device has 3584 CUDA cores, 11GB of GDDR5X and 352bit memory bus, which points exactly to a GP102 used for the GTX 1080 Ti and Titan X Pascal. Even more intriguing is that fact that the card features the same clocks as its desktop counterpart, unlike most mobile cards which are usually clocked lower. We can see the effects of the clock speed in the 33K 3DMark11 score which lines up where we expect it to be.

At this point, we are still likely many months away from an official launch and release. In the past, we have seen some laptop vendors mount desktop grade GPUs in their devices. At this point, it remains to be seen if this new device is one of a few niche ones or if Nvidia is aiming to push the frontier of mobile gaming. Even if it widespread though, don’t expect the laptop to be very mobile or slim given the massive 250W TDP.