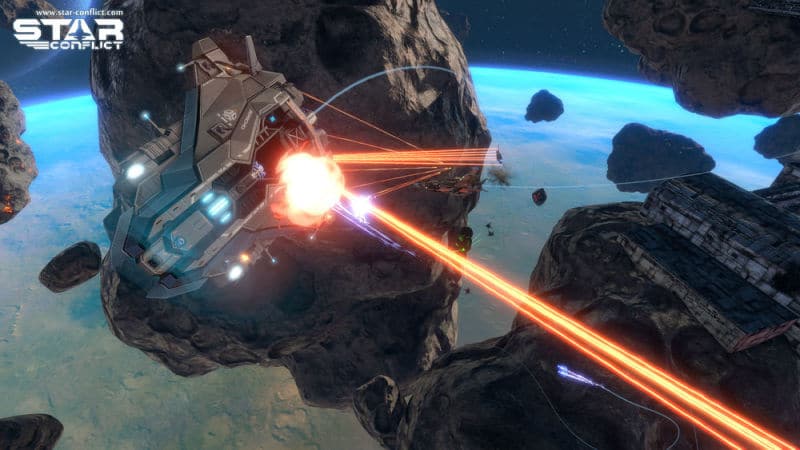 Star Conflict is currently my favourite example of how much fun the DK2 can be for gaming. Not only because the developers have done a great job of implementing support for the hardware, but also because the game is free to play. Of course, just like any other free to play game, there are micro-transactions build into the game. However, if you’re only interested in the occasional space battle, you’ll easily be able to enjoy the vanilla offerings.

This is one of the few DK2 games that has put in the extra effort to give you a full VR ready user interface, menu system and more. The lobby is a 3D environment with all your statistics, matchmaking and even the options menus being laid out in a format that is well suited to the DK2. This means you don’t have to take off the headset between games and can stay fully immersed in the game world.

Star Conflict comes with a range of modes such as PVP and PVR. The core concept boils down to flying around a pre-determined area of space, full of obstacles such as space stations, floating rocks and more, while you have dog flights with your enemies.

Unfortunately, there is no cockpit view just yet, so the games VR camera is mounted on top of the ship in a kind of turret position. This sounds a little strange, but works incredibly well. Aiming your guns with your controller of choice is cool as you can look to the wings of the ship and see them rotating as you control them; very cool! The sense of scale and depth in SC is impressive, doing tight turns and barrel rolls around the surface of a massive asteroid to come full circle behind your enemies is a blast; such maneuvers are very easy when you have the situational awareness that the DK2 provides.

The game fully supports the Xbox 360 controller, while also detecting a PlayStation 4 controller (via USB cable) as a “Wireless Controller”. The game is very controller friendly, as it’s easy to configure a primary and secondary button for each function, while also supporting all the Axis that either controller has to offer (with the exception of Gyroscope on DS4).

Flight sticks are fully supported and easily setup just like any other controller.  The dual control settings allow you to configure extra buttons to your keyboard or other peripherals should your flight stick have a limited number of controls.

Keyboard and mouse support is still the most accurate play style (IMO) for this game. However, you may want to consider a decent quality flight stick with a good layout as finding keyboard buttons can be a little tricky while wearing the Oculus Rift headset.

Setting up DK2 is very easy in Star Conflict. Login to the game and bring up the options menu, there is a special OculusRift tab available. Here you can simply tick “Enable Oculus” and you are good to go! You may need to restart the game if prompted. Simply set the OculusConfigUtility to “extended” mode and set your DK2 as the primary display in the windows display configuration window. Leave the OculusConfigUtility open and re-launch the game via steam.

If some issues persist, please return to the general tips on the first page of this article.