OCZ Sneak in Update of Vertex 460A, Features A19 MLC NAND Flash Upgrade 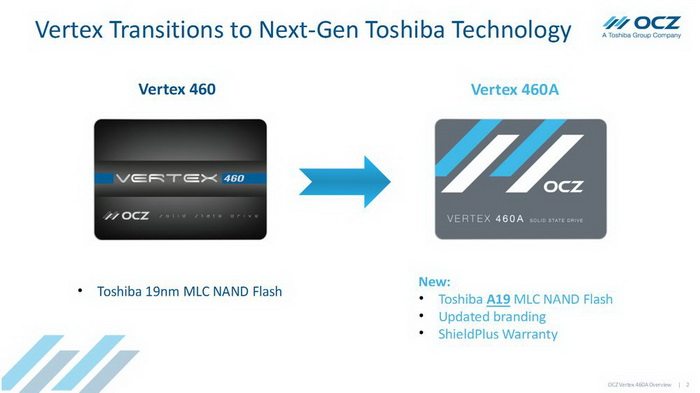 “Vertex Transitions to Next-Gen Toshiba Technology” reads the latest release press from solid state manufacturer OCZ. Their Vertex 460 disk series has seen a small update to Vertex 460A – providing a revitalized flash to the Toshiba A19 MLC NAND, upgraded warranty and a slight appearance change.

Originally released as an upgrade to the 450, the 460 series utilized OCZ’s Barefoot 3 master flash and contained an upgrade to 19nm components from 20nm. The newly released 460A series now steps this up yet again, changing it up to A19 MLC flash memory. According to reports, this has made no changes to the overall performance of the device however. These drives are still available in a 120GB edition providing a 530,420 MB/s read and write or 240/480GB models with a 540,525 MB/s read and write ability.

As mentioned before, the outside appearance of the drive has changed slightly – as you can see in the cover image, it looks a little less ‘corporate’ and a little more ‘consumer new-age’, with OCZ painting some cool shades of white and blue running across the device. The warranty provided with the 460A has been upgraded to OCZ’s ‘ShieldPlus’ level, meaning that it’s still coming with the three-years as per the original 460, but means that members of the US and Europe are able to skip the broker and send their warranty claims direct to OCZ.