Over the last few months, OCZ have been in the limelight with the news of imminent bankruptcy and to be quite honest, for us reviewers and particularly those of use that review their products it has been very had to ignore the facts and what was going on. As a result I was very sceptical that I was going to get any more products from them and these were the last days of one of the best SSDs names out there. Fortunately though, help was on hand and following a buyout from Toshiba, OCZ are once again back in the game. With Indlinx controllers at their heart and now having Toshiba’s own NAND packages spread around, OCZ have now got a stable supply of components for their SSDs and with this set of critical changes taking place, there is no other way to display their come back but to release a new drive.

Following in the footsteps of the Vertex 450, the Vertex 460 is home to the same Indlinx BareFoot 3 M10 controller, however on the NAND front the younger and fresher drive takes advantage of Toshiba’s 19nm MLC NAND packages and the resulting combination sees a drive that on paper looks quite promising. The rated performance figures put it up with some of the class leading drives, although it has been priced in the region of other mainstream drives.

Whilst some people are sceptical that the buyout from Toshiba will help out OCZ in the longterm, OCZ  are still going to run under their own name and the essence of OCZ’s previous products is still going to be there. I personally have high hopes for them and I look forward to seeing a number of class leading products roll off the production line in the near future. There is only one way to see how the rejuvenation process has gone and that is to put the drives to test and see what they are made of. 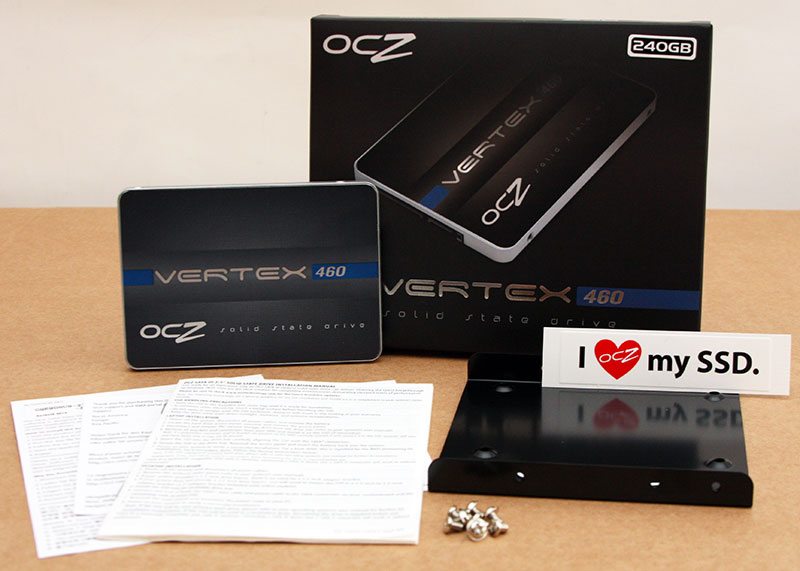 Bundled in with the Vertex 460, we are provided with a typical OCZ array of extras including a 2.5″ to 3.5″ drive bay adaptor, a copy of Acronis True Image Home for drive to drive migration, screws for installation and a ‘I ♥ my SSD’ sticker.