Over the last few years, virtually all of the solid state drives that I’ve looked at and put through their paces have been part of the SATA III family of drives and whilst I have seen the performance levels come forward in leaps and bounds, there has always been a certain plateau of performance that was going to be reached eventually. Today’s SATA III SSDs have, for quite some time now, been able to max out and saturate the bandwidth that the interface has had to offer and this has left manufacturers with a strong challenge of how to improve the solid state drive as we know it and squeeze out better IOPs performance and improve the NAND itself to give a better life span as far as read/write cycles are concerned. To say the least we are literally at the limits of what can be done on the SATA III interface – so the real question that one would ask is where do we go from here? One path would be to bring out a new SATA standard – lets call it SATA IV; but to do this would require a lot of work and the cost of the products at the end of it could be potentially jaw dropping, so for now lets wait for a new standard to brew at a lower rate and let it slowly trickle into the market.

So with upgrading the SATA standard out of the question for new, we start to look at how else we can let the SSD run free and this brings us to PCI Express. Having a PCIe mounted drive is not a new concept by any means, after all OCZ got their footsteps into this market years ago with the RevoDrive and even when we look at the latest model, the RevoDrive 3 X2 – the performance that is on offer is way past the levels that we can get from a SATA interface. Whilst PCIe SSDs are not common place on the consumer market at this moment in time, over the last couple of years they have become a popular product in the enterprise market, partly due to the increased bandwidth, but more importantly due to their greater capacities that a single drive can offer and also superior IOPs performance, which in the enterprise market is far more important than sequential speeds.

Coming back down to the consumer level, advances in SSD technology have seen the mSATA interface mature and with the unveiling of the NGFF (Next Generation Form Factor) drive late last year, we are now watching drives push past the lucrative caps of SATA III. Once again the gates have been flung wide open as manufacturers start to hop onto the PCIe bandwagon to take storage to the next level.

Coming over to Plextor’s addition to the new trend, the drive that I’m taking a look at today is part of the M6 family of drives, which is home to three different types of drive. The first drive in this family is a traditional 2.5″ SATA drive, whilst a smaller mSATA spin-off provides compatibility with compact devices such as notebooks and ultra-compact desktop systems. The third drive to make up the group is the M6e – a NGFF drive that is mounted on to a PCIe backplane, giving it the freedom to open up the throttle and take speed and performance well over that of SATA. 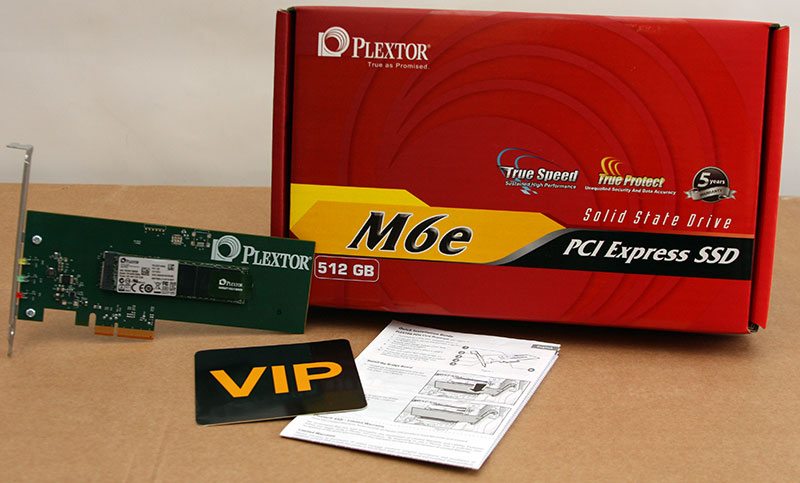 The M6e comes in a well padded box in an anti-static bag and aside from the drive, Plextor include a quick installation guide and a VIP booklet.