For many years now, passively cooled components and hardware has been the only real way to get a totally silent computer, and this was more of a dream years ago when cooling solutions were not as acoustically pleasing to the ear, however the furnaces of systems back then also meant that the though of going passive would lead to the wonder if the system would melt under the pure heat that came from the components.

Whilst these days, lets admit it, some components still do run relatively hot, the technology behind fans and air coolers in general has come on leaps and bounds, with the water cooling option now more of a reality for many people which also leads to lower temperatures on the hardware installed.

When it comes to it though, for those that relish the dream of a silent system, there is still only one way of truly doing so, and that is to go passive. Now whilst on the low end of the performance scale with components that have a sub 100W TDP this is a great idea, when we look over that threshold things can start to get a little tricky when it comes to handling keeping the GPU core, in this instance, cool under the collar.

PowerColor are not put off by this challenge though and continuing their line of passive products under the SCS3 title, the last of which was a 6850, they aim to take a second attempt at making a mid range card that doesn’t suffer from the heat that a 130W core can produce.

Inside the box PowerColor like we’ve seen before, keep things nice and simple, including a driver CD that no longer bears the ATI branding that we’ve long been waiting to see finally changed. 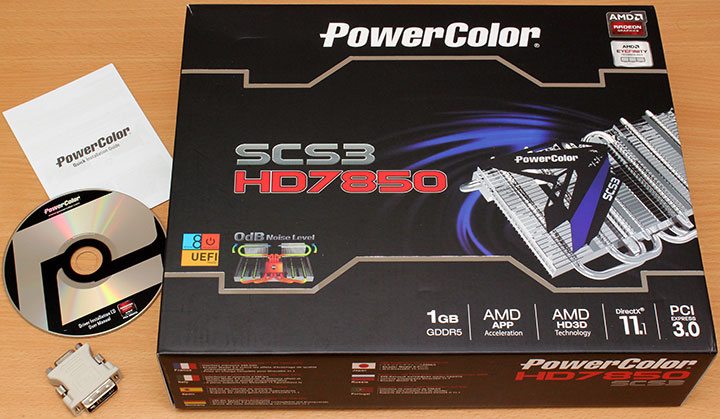