In a similar fashion to my last review of a Thecus NAS, it has been a little while since I’ve looked at a QNAP system, but this is not to say that stocks have run dry of NAS samples and now we’re back in full swing now with another system from one of the major players in the NAS market.

We’ve looked at an eight bay desktop system from QNAP before, namely the TS869-Pro and whilst both of these units look pretty much the same and in general specs they are pretty much the same, as you can guess by now, they’re a little different and by that, the 879Pro that we’re going to look at today has a little bit extra to offer over the older 869Pro that I looked at nearly a year ago.

So the question is really, what is the difference? Well on the basic part, the 869Pro is set and equipped for the SMB market with it’s dual core Atom CPU, 1GB of RAM and no space for network expansion, whereas on the other hand, the 879Pro is grouped into the high-end sector of QNAP’s product range and features a similar specification bar an Intel Core i3-2130 3.2GHz processor, 2GB or RAM and capacity to upgrade the network connectivity with either an additional two Gigabit Ethernet ports or two 10 Gigabit port via Fibre or Ethernet. 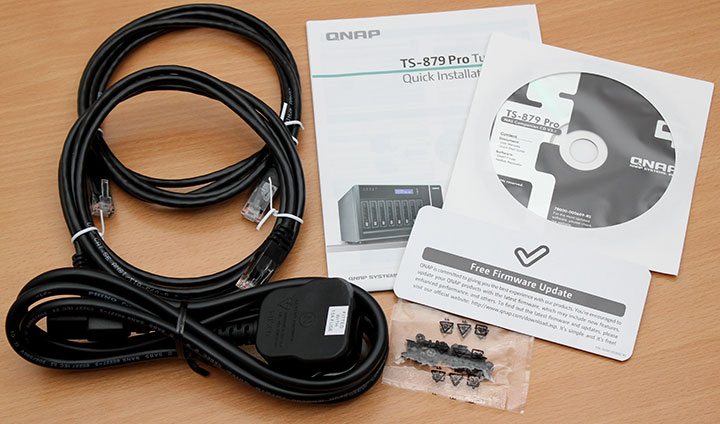 To accompany the NAS itself we do get a typical accessory pack from QNAP which includes a pair of patch leads, power cable, driver CD, quick installation guide, firmware note and most importantly two sets of screws for securing the drives into the trays.