Since their launch, USB3.0 flash drives have been one of those items that any avid enthusiast has had to have in their portfolio of tech gadgets, but when we get down to the simple facts of what they have to offer over any other USB based flash drive, 99% of the time I would guarantee that it’s the higher capacity and read speeds that make them attractive. When we look at the bigger picture, it is easy to see why these two details make these flash drives desirable. With the amount of data that we are wanting to move around growing exponentially, being able to move large volumes of data in one hit and being able to transfer content to and from the drive quickly is key. There is though one problem that the vast majority of these drives have in common and that is all-round read performance. Being able to say you’ve got fast sequential speeds is one thing, but when we move down the ladder to the smaller file sizes, we soon start to see things not looking so great – especially when compared to the read performance figures that are available.

True to form there is always one manufacturer that sees this weakness in the market and ventures on to resolve the problem with a new class of drive and this is exactly what SanDisk has aimed to do with the Extreme PRO USB3.0 flash drive. Although we don’t know exactly which NAND in particular has been used, going by the specs we could make a fair bet that its of a synchronous variety and guaging by the sixe of the drive there could easily be two NAND packages alongside the drives controller. That said though, all of this is packed into an aluminium and black plastic body and with read and write speeds of 260MB/s and 240MB/s respectively on offer, we are touching on the performance that SATAII SSDs have to give. Sounds good doesn’t it? Boasting up to 60x the performance of USB2.0 flash drives is a big thing to shout about so it’s all down to those all important performance results to make or break SanDisk’s claims that this is truly an Extreme performing drive. 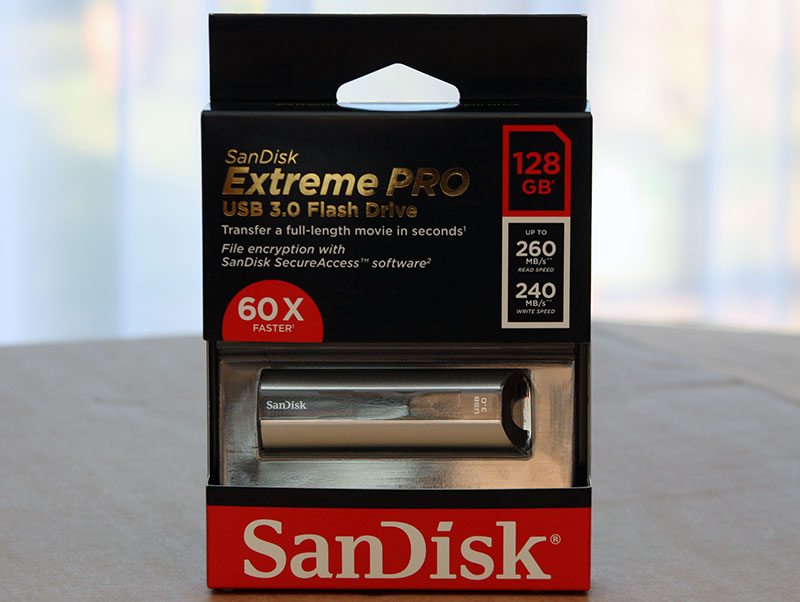 On the front of the matte black box we find a typical SanDisk layout with the drive on full view the model name and some key performance figures on display alongside the capacity. SanDisk have no need to use flashy graphics all over their packaging, instead preferring to use a top the point design with a small amount of flare with the product name printed in a gold like colour.