In today’s market, there are countless storage options out there for you to choose for your current system or for a new build that you are planning and in general we find one of two main options being selected for the primary boot drive – this being either a hard drive which offers up large storage capacities, or a solid state drive that mainly offers up the speed.  In the OEM sector, the operating system is typically installed on to a hard drive, whilst custom-built systems from the like of Overclockers UK and PC Specialist use either hard drives or the faster technology that a solid state drive has to offer based on the target audience and the price point.

When we look at where we can boost the performance of a system, be it a pre-built system that is already owned, or one that is in the process of being “spec’d” up, one of the key areas where performance can be gained is through the storage medium, but even in today’s market, the price per GB of storage that a SSD sees over that of a hard drive is still quite high. This premium for SSD performance can in some instances leave users with quite a dilemma; do you choose space or performance?  One option that many say you should go down is to buy a SSD for the boot drive and then a secondary hard drive for the volume, but although the price of entry-level solid state products is far more affordable than it was only a year or to back, by the time you take the price of a hard drive into account, the cost is still fairly expensive for some. Naturally the other logical route that many users see is to simply go down the mechanical drive route and sacrifice performance in favour of purchase cost and the larger volumes that are on offer.

There is a third option that still seems to be pushed to one side of the market, namely the hybrid drive. This type of drive which incorporates both solid state technology along with the volume of a spinning platter has been around for a couple of years now and even though there are a good selection of products on the market, there is this unspoken hesitation that a hybrid drive is not all that good and it is better to just cut your losses and get a SSD. The matter of fact is though that as the technology has matured, the performance benefit that can be seen from a SSHD over a straight forward mechanical drive is far greater than it used to be and the result is a drive which can offer faster read speeds and in turn giving the user a notable boost in the overall system performance – particularly when booting into Windows as an example. 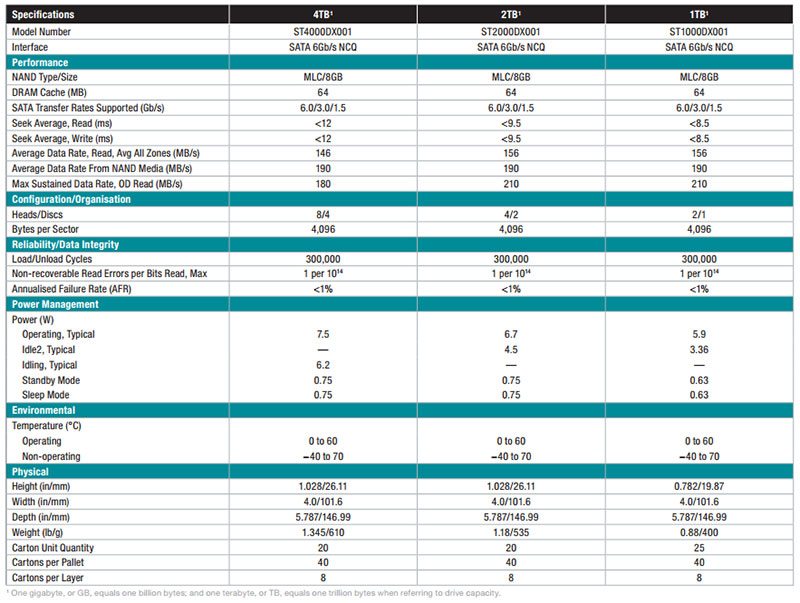 Filtering through the specifications of the desktop SSHDs, we can see that all SKUs come with a 64MB cache on a SATAIII interface along with an average seek time as low as ~8.5ms. For the solid state portion of the drive we get 8GB of MLC type NAND and as a result we can see read speeds of up to 190MB/s on offer when accessing cached data (up to ~156MB/s directly from non-cached data.