The Snowstorm Drone Is Large Enough to Carry People 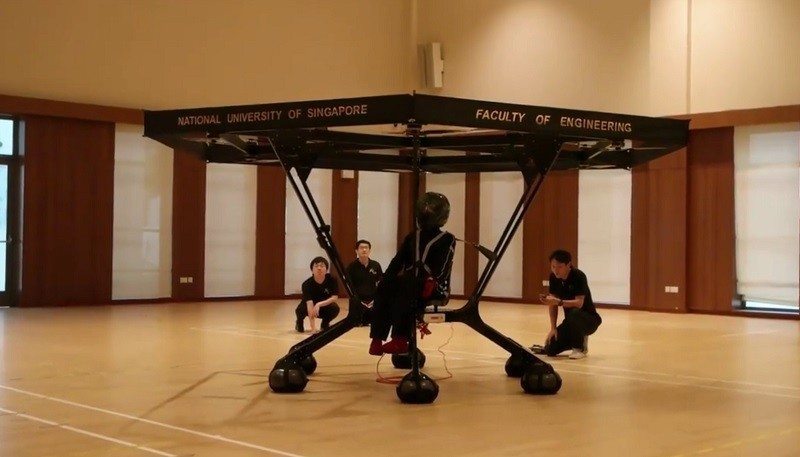 Even though I don’t see flying cars becoming the standard anytime soon, it would seem that drones are more likely to take their place as flying personal transportation vehicles, at least judging by an interesting project named Snowstorm. We’re talking about a giant drone that’s actually capable of carrying people, albeit just indoors for now. It was created by a team from the National University of Singapore, and it boasts a hexagonal frame as well as 24 propellers. The electric-powered drone can only remain in the air for about five minutes, and since it can only be used indoors, it doesn’t offer much in the way of practicality right now.

However, it does show that drones could very well be used for personal transportation purposes in the future, as long as certain safety-related issues are resolved first. The most important issue is obviously related to the rapidly spinning blades that are placed directly above the passenger’s head, which is why the demonstration video that you can watch below was mainly focused on transporting a test dummy. Dr. Joerg Weigl, who was in charge of supervising the project, had a few words to say about the Snowstorm drone:

“A common trope in popular science fiction is the projection of humans flying on our own – think the Jetsons, or even Back to the Future. NUS’ Snowstorm shows that a personal flying machine is a very real possibility, primarily as a means to fulfill our dreams of flying within a recreational setting.”

BEHOLD! THE SNOWSTORM – Singapore's FIRST indoor personal flying machine! Designed and built by a team of NUS students, Snowstorm is an electric-powered aircraft capable of vertical take-off and landing that can be controlled by a pilot. This super cool project is part of FrogWorks, a collaboration between the NUS Faculty of Engineering's Design-Centric Programme and the NUS University Scholars Programme.Now your dreams of flight can become a reality… with your very own personal aircraft! Follow the SNOWSTORM project here, FW Air: Electric Aviation#NUSLife #NUSResearch

Posted by National University of Singapore on Wednesday, December 2, 2015