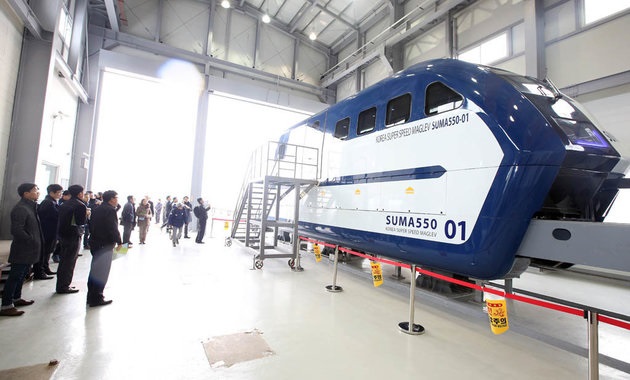 South Korea is launching a new initiative to develop a near-supersonic public transport system, capable of speeds of almost 1,000km/h, faster than a maglev train (pictured above), which is capable of 500km/h, and making it the first potential rival for Elon Musk’s Hyperloop system, which is currently in development in various parts of the world. The Korea Railroad Research Institute (KRRI) says the technology could allow travel from Seoul to Busan in just half-an-hour.

“We hope to create an ultra-fast train, which will travel inside a state-of-the-art low-pressure tube at lightning speeds, in the not-too-distant future,” a KRRI official told the South China Morning Post. “To that end, we will cooperate with associated institutes as well as Hanyang University to check the viability of various related technologies called the hyper-tube format over the next three years.”

This method of pressurised-tube propulsion is uncannily similar to Hyperloop, and the KRRI admits that it is competing against innovations such as Musk’s.

“Many countries such as the United States, Canada, and China are competing to take the lead in this futuristic technology and we will also try to pre-empt our global rivals,” the KRRI official added. “The government has focused on interdisciplinary research and this will be the biggest effort we are working on to develop a representative future technology.”