In the opening weeks of this year at the Consumer Electronics Show in Las Vegas, I took some time to meet up with the guys from Thecus to see what they had coming to the market in 2014. Although their stand was comparatively small compared to the hundreds of other vendors that made an appearance, their goal was straight and to the point, displaying a small selection of their latest systems and letting the performance and strong recognition within the market do most of the talking. For those who may not know, Thecus are part of the top ten NAS vendors globally, covering every sector of the market; from the home based entry-level user, right up to the large enterprise environment that we see in data centres, for example.

Of the items that Thecus had to show off, one of the systems caught my attention due to its slightly different design and also the highlight of Thecus’ new ‘Intelligent NAS’ Software. Built for a new line of systems, Intelligent NAS is designed to make the setup and management process of a network storage system less daunting for the first time user, where the thought of having to connect through IP addresses and look for a system manually is, for many, quite scary. As a result of the reservations that are put against network storage, the result is the addition of hard drives to computers and sharing the content out from there – this in fact can be a lot harder than using a NAS; believe it or not.

Ease of use is not the only factor that entry-level users look at when they’re shopping around for a new bit of tech. With today’s market bursting at the seems with different products that pack tons of features and the latest hardware to deliver top-level performance figures for their class, budget solutions right on the entry-level end of the scale are limited and once the cost of drives is taken into account, the overall setup cost can be a little off-putting. This is where the N2310 comes into play. This compact 2-bay system takes a small step back in the processor evolution, resolving back to a single core SoC running at 800MHz along with 512MB DDR3 RAM, USB3.0 support and a Realtek Gigabit Ethernet port. Mix this in with Thecus OS6 user interface and an ultra low price point of around £120 in the UK and $150 in the US and what you have is the recipe for a feather-weight champion in its class.

Ultimately the performance for the price is where we will be most interested along with the question if single core processor is able to drive a strong battle against the bigger, more beefy and more expensive options that are out there on this end of the scale. 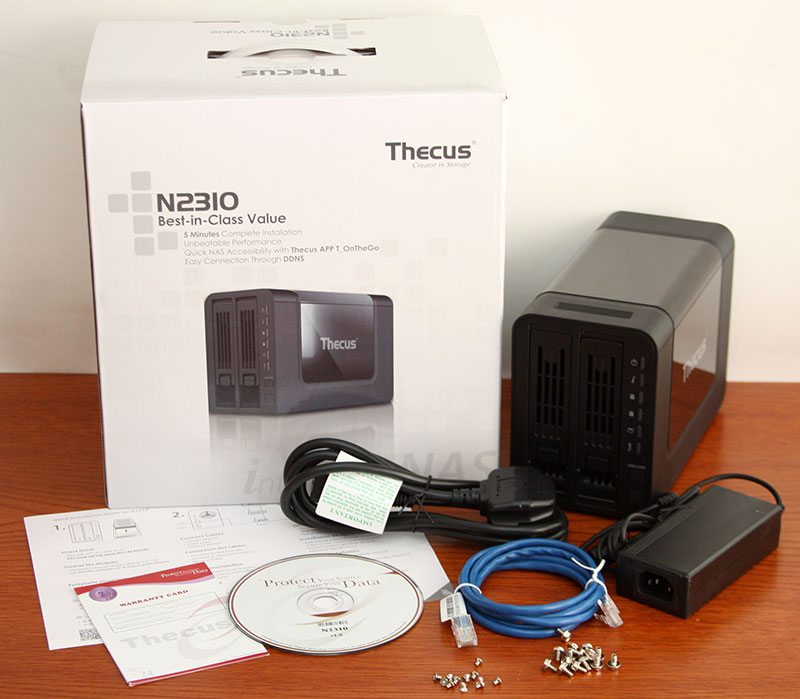 The contents of the N2310 package are relatively standard for Thecus. A warranty card, setup CD and quick installation guide, along with screws for both 2.5″ and 3.5″ drives, a patch lead and mains power adaptor give all that is needed, although I’ve still not worked out as of yet why sixteen screws are included for 3.5″ drives considering there are only twelve holes to fill.