In today’s market, performance, connectivity and software features are not the only areas that NAS manufacturers have to focus on when developing a new product. As businesses strive to save overhead costs wherever they can, the focus is now shifting over to saving power. Although performance is still a key area of focus, like desktop components, trying to get as much processing power as possible whilst using as little power as possible is the next step in the NAS evolutionary timeline. The N4800Eco that we are taking a look at today is by no means a newcomer to the market, in fact it saw its debut in the early part of last year, but with so many systems on offer today, Thecus are looking to give this system a second push to the market, proving that you don’t have to get the latest system in order to get the best balance between performance and cost of ownership.

As its name suggests, the N4800Eco is in fact a direct relative to the renowned N4800 4-bay system that came to market in the middle part of 2012. Powered by a 3rd generation Intel Atom D2700 series CPU, the N4800 once again proved that it was a strong contender in the SMB market as it superseded the N4200 that we took a look at ourselves. Where the N4800Eco differs over the N4800 mainly comes down to the price point. Aside from the removal of the battery backup unit, the N4800 and the Eco are almost identical part-for-part, although the Atom CPU has been updated to a D2701 from the D2700 as seen on the N4800 – giving a slightly better power consumption in respect to the older unit. The Eco branding is there to show that it is a more economically cost-effective product to buy, with the 20% power saving that is advertised relating to the power difference between this system and the much older N4200.

Even though the N4800Eco is positioned within the SMB market, we find a number of features that also make it a worthy consideration for the SOHO market, with full multimedia support through a HDMI connection and a built-in media front end for direct playback of content from the system itself. Since the launch of OS6, Thecus now ship this system with the latest Linux-based OS, offering up a more fluid and intuitive user interface, with support for link aggregation, McAffee Antivirus, Cloud access as well as the sharing of devices connected through the systems eSATA and USB3.0 ports. 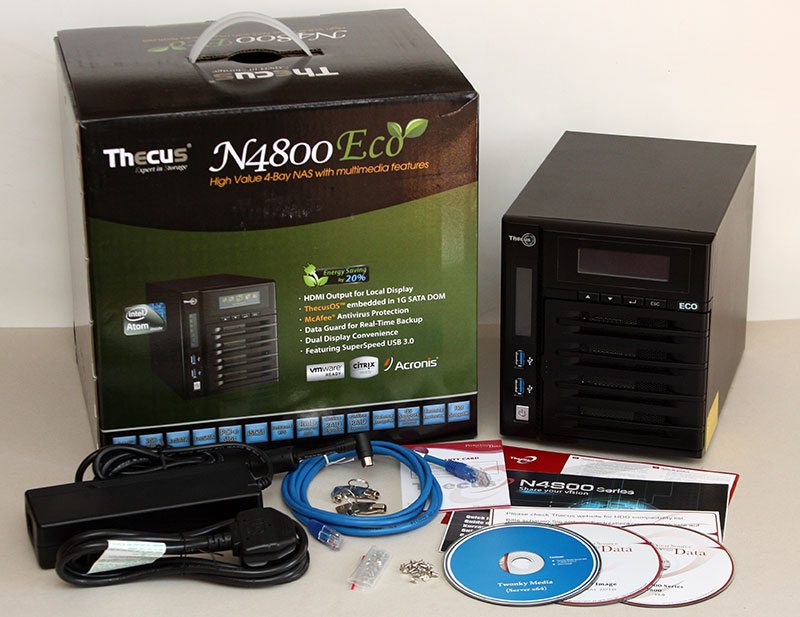 Showing off it economical traits, the box for this NAS is very green when compared to any other box I’ve seen from Thecus. A few key features and specifications are printed beside a picture of the system and there is a highlight to show if its 20% power saving that can be expected. Inside the box we get a typical Thecus package including an AC power adapter, network cable and screws for installing both 2.5″ and 3.5″ drives and a set of keys for locking the drives in place. A set of CDs with various extras and a set of manuals give everything we need to get going.