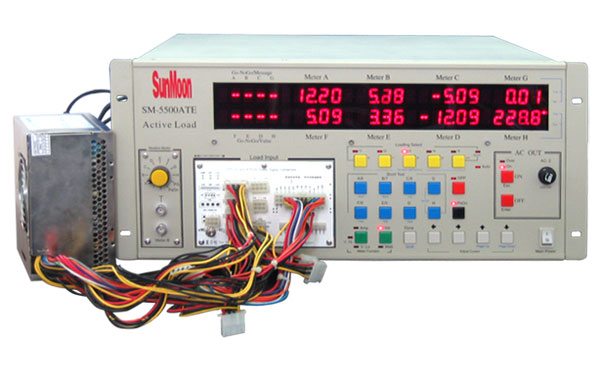 What the eTeknix Test Procedure Involves

Other Things to Consider

To test voltage regulation we load the power supply to five different load scenarios that give an equal spread of load across every single rail. So that means 20% on all rails, 40% on all rails and so on. We then calculate the average deviance of each rail from its expected voltage. Ideally, anything of +/- 2% regulation is seen as a very good result.

Power efficiency is measured by calculating actual supplied wattage divided by the wattage drawn at the wall/plug, multiplied by 100 to give a percentage. We then compare that to the particular 80 Plus certification the company claims to see if it meets that. You can see the 80 Plus certifications below, we always test power supplies at 230v.

Power Factor Correction is the ratio of the real power flowing to the load, to the apparent power in the circuit. The aim of PFC is to make the load circuitry that is power factor corrected appear purely resistive (apparent power equal to real power). In this case, the voltage and current are in phase and the reactive power consumption is zero. The closer the number to one the better as this allows the most efficient delivery of electrical power (Source – Wikipedia).

Noise and Ripple can easily be measured by an oscilloscope. These show how much voltage fluctuation there is on a particular rail. We tested the rail stability of the 3.3-volt, 5-volt and 12-volt rails using an identical time and millivolt scale for all graphs. millivolt ripple is measured by the peak to peak size of the voltage curve.

The latest ATX 12 volt version 2.3 specifications state that ripple from peak to peak must be no higher than 50 millivolts for the 3.3-volt and 5-volt rails, while the 12-volt rail is allowed up to 120 millivolts peak to peak to stay within specifications. Millivolt figures are stated to the closest increment of 5 given their variability. 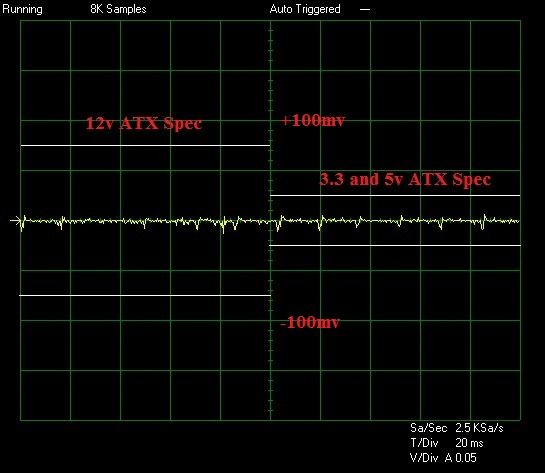 Power supplies often quote as having various protection mechanisms such and the most important of these is Over Power Protection. In our testing we crank up the power draw until the power supply either shuts down (meaning the OPP mechanism is present and working) or blows up (meaning it is either not present or not working). We then note the maximum power consumption before the power supply shut down, or before it blew up.

In my experience, the following general relationships apply between noise levels and fan speeds, though it can vary greatly between the type of fan used.