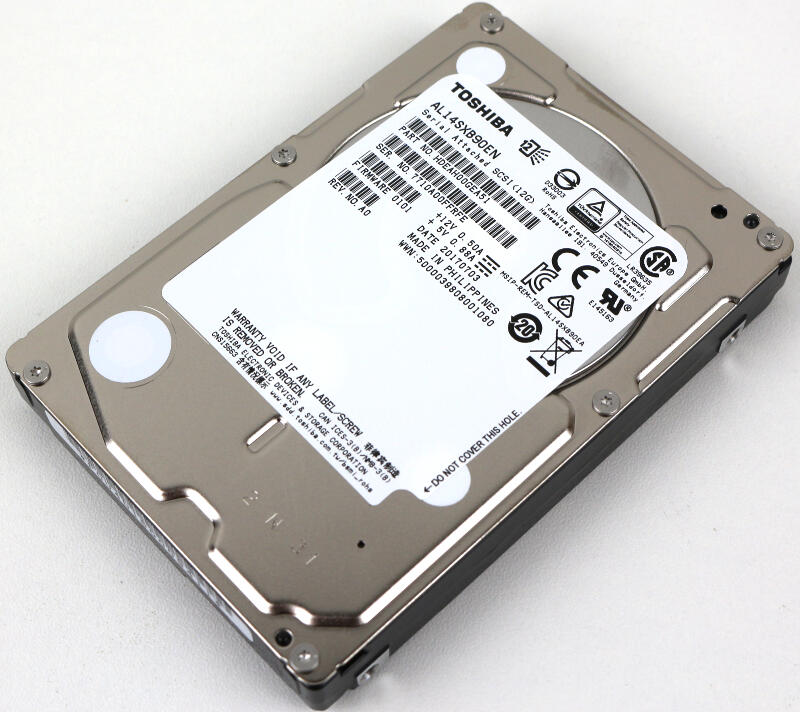 SSDs might take most of the hype these days, but they aren’t everything, and they aren’t always the right choice. Today I’m taking a closer look at Toshiba‘s highest-performing 15,000 RPM line, the AL14SX series (Product Link). The AL14SX is an enterprise performance drive with a 12Gbps SAS connection, engineered for mission-critical IT operations.

There is a variety of models available to choose from, including native 512 (512n), emulated 512 (512e), or native 4K sector length technologies. With all options available, you can get an optimum application and operating system compatibility. Today, I have the native 512 version (AL14SXB90EN) in the lab. 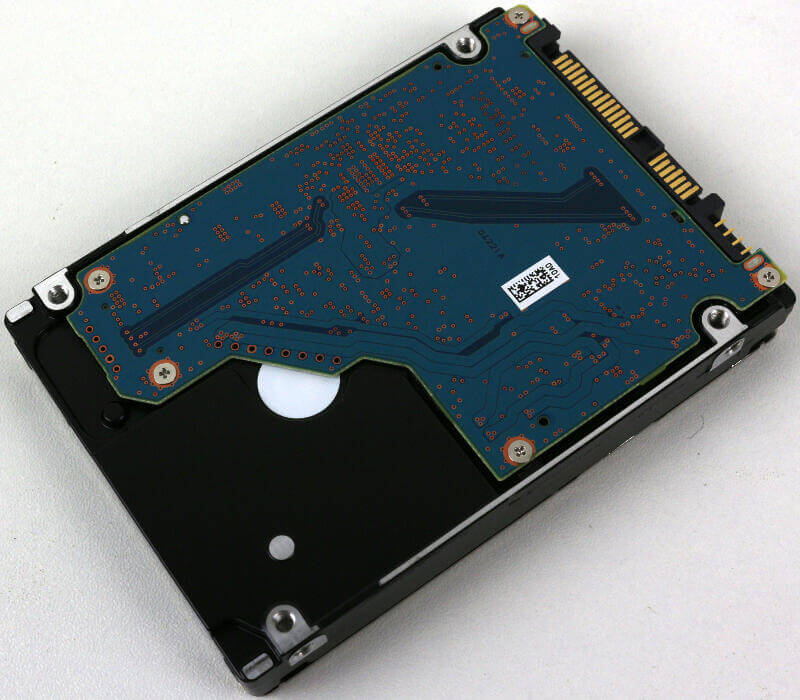 It is no surprise that Toshiba’s AL14SX comes in a standard form factor. These kinds of drives need to be compatible and ready to plug right into the systems where they are needed. The 2.5-inch form factor with a height of 15mm makes it compatible with close to any server or workstation out there.

To get the best possible performance out of the drive, despite the small size, it’s using an SAS 12Gbit/s SAS interface. It might make it incompatible with your every-day SATA-based system, but that’s not the intended market anyway.

The SAS interface can only deliver the bandwidth for the performance; the drive has to be able to deliver it too. And it can. When we think SATA3 2.5-inch drives, we operate between 100 and 120MB/s throughput. The AL14SX is rated for up to 290MB/s. Not only that, but it also features a market-leading 2ms latency. That is thanks to the engineering, but also the 15,000 RPM spindle speed. The AL14SX also has a buffer of 128MB to help.

Such a performance in such a small form factor allows for fast high-density storage, and that’s what the AL14SX is all about. The fast spindle speed does have one downside, and that is the noise. It isn’t as bad as you’d think as it is rated for a typical noise level of 33dB. Then again, noise isn’t really an issue in server environments.

Performance is just one important aspect of a drive like the AL14SX; data protection is another. Toshiba incorporated their Persistent Write Cache technology which protects against data loss in the event of unexpected power loss. It also helps maintain optimum data reliability for high-duty cycle mission-critical environments.

You power supply could die, your UPS could fail, or maybe someone accidentally unplugged the wrong server. Whatever the cause for an accidental shutdown is, you don’t want to lose or corrupt your data. And that’s why you’ll want such technologies in critical drives. 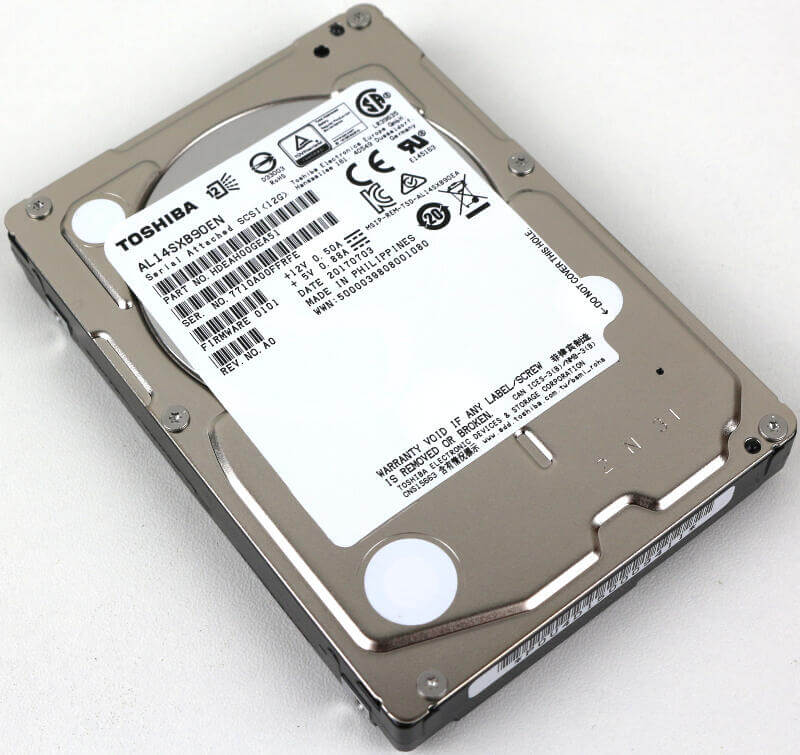 While we’re already talking about power, we might as well touch the power consumption of the AL14SX. With 9.2 watts during read and write operations, the drive is quite effective. At least, when we consider what we’re dealing with here. The idle power consumption is rated at 5.6 Watts. Now, whether that’s a lot or not, depends on what you chose to compare it to.

We’ve talked performance so far; it is time to talk reliability. The AL14SX is a very reliable piece of hardware, as we’ve already learned from the Persistent Write Technology. It is certified for use with 24/7-running critical workloads which is great considering it’s what it is built for. But it should be mentioned anyway. The drive has a high 2,000,000 hours MTTF and a load/unload cycle rating of  600,000.

It is a great situation to have a fast performing drive such as the AL14SX, at least when everything is working as it should. But what when that isn’t the case; then you need the support. I’m not fully aware of the situation in other areas of the world, and I can only speak for Europe in this case, but I assume Toshiba has the same service all over the world.

I had some initial trouble when I received this test sample, and after some regular troubleshooting, I thought I had a dead drive. It wasn’t, but it was what it looked like. I contacted the Toshiba, explained the situation, my setup, and the steps I had gone through to verify the trouble. Less than 24 hours later, a UPS courier rang my doorbell with a replacement drive.

Situations like this are the reason that Toshiba established their show-and-evaluation laboratory and support in Düsseldorf, Germany. Here, they have all drives and common environments in place, including server, JBOD, RAID controllers, etc. That makes them well prepared for almost any situation, and it makes them able to help the end-user regardless where they buy their products from.

To finish the story of my trouble, it turned out to be my brand-new SFF-8086 to SFF-8482 cable that was at fault. Two of the four connectors are broken, and bad luck would have it that I tested the drive on those two. Even moving the drive to a different connector on the cable didn’t help as the second choice was bad too. Still, the Toshiba support was there for me, and I can now return the extra drive and continue with this review. 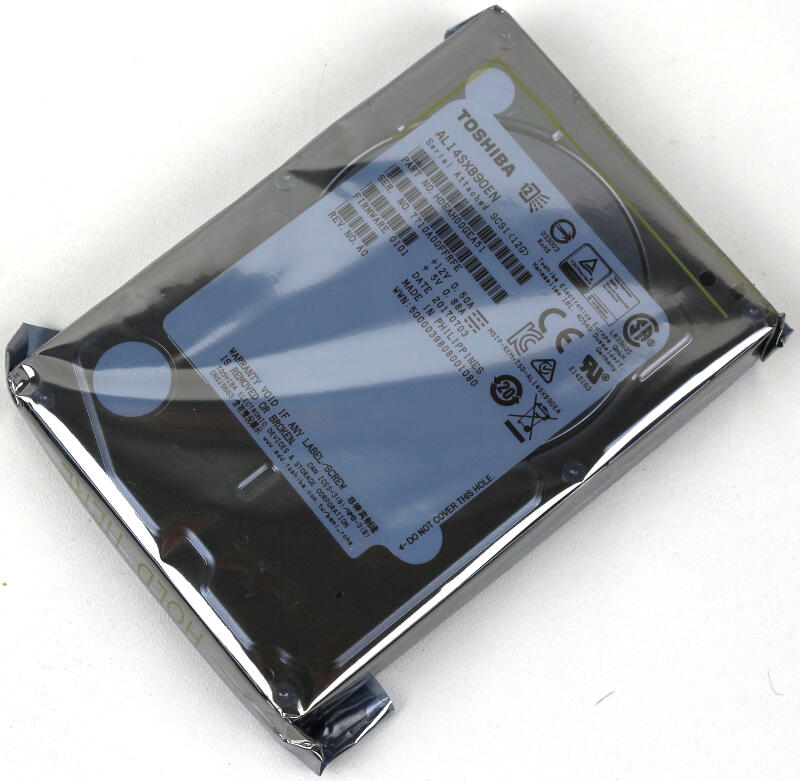