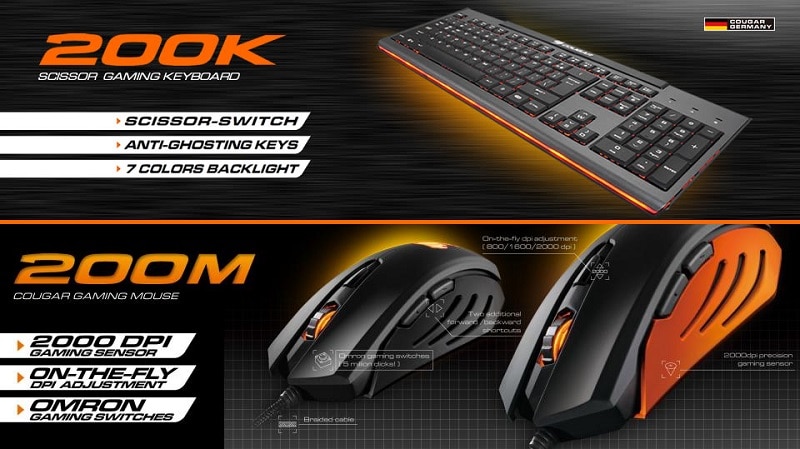 Cougar may not be the first name you think of when purchasing a new set of gaming peripherals, but the company has been pushing hard over the last year to create some very competitive products. Over the last few months especially, we’ve seen a stunning range of gaming mice and keyboards that have been winning over gamers around the world and it looks like Cougar is hoping to continue that trend with the release of their 200 series.

The 200K keyboard and the 200M mouse aren’t designed to be flagship gaming products, but they do seem to offer a nice set of features for general day to day usage, as well as occasional gaming. So while I doubt these are going to be snapped up by pro gamers around the world, your typical home PC user who spends more time browsing the web and working, maybe a couple of hours playing games on the weekend when they’re off work, are most likely the target audience for this new hardware. What better way to see how these two products perform, that to test them together!

The 200M comes equipped with a hard-wired black braided cable and a gold-plated USB connector. 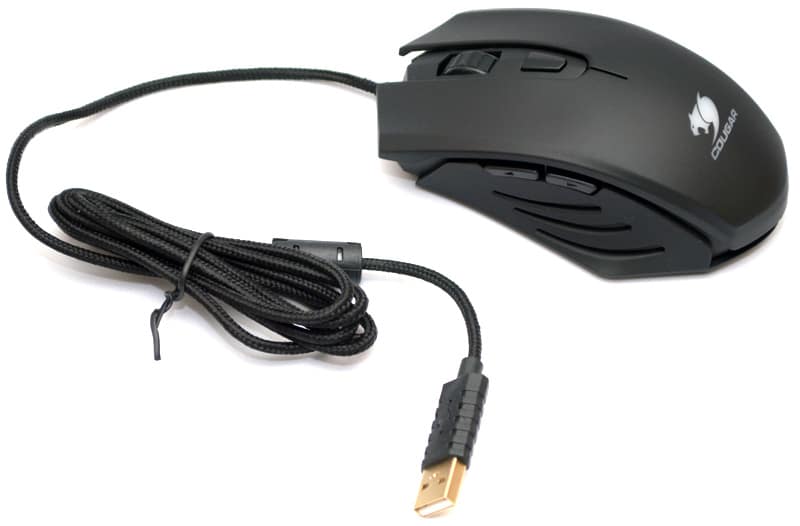 The 200M is designed for right-hand use and comes with a pair of switches down the left side, as well as some deep ridges for added grip; although they also liven up the aesthetics a little too. 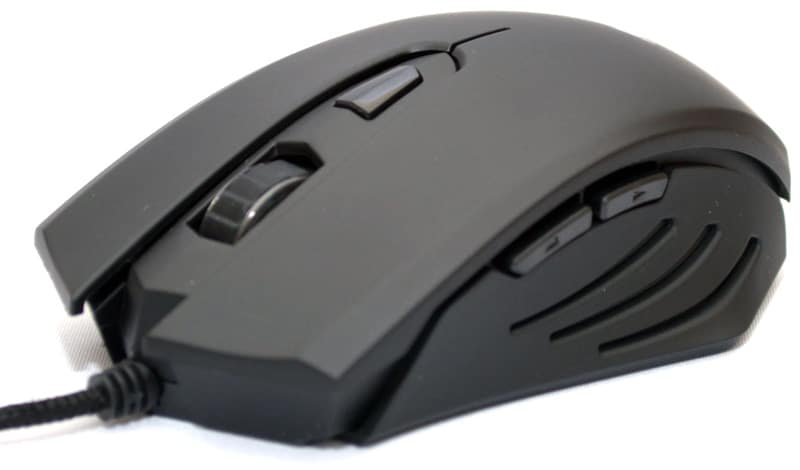 The right side of the mouse looks very similar to the left, albeit without the extra switches. There’s an LED back-lit Cougar logo on the back of the mouse. 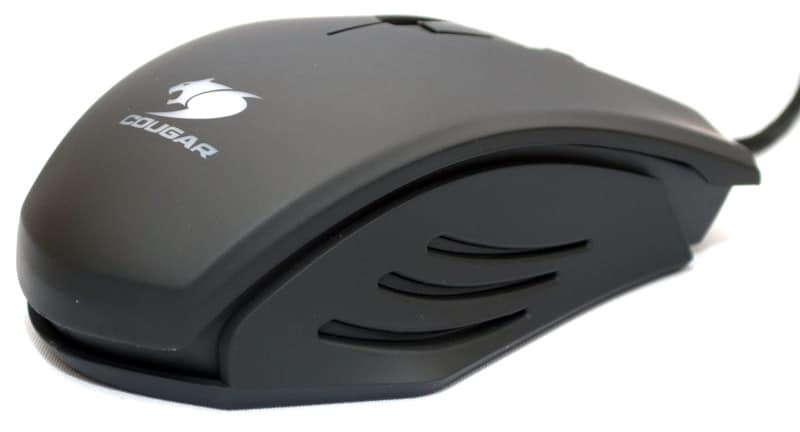 There’s a DPI toggle button in the top-centre of the mouse and a rubber grip coated scroll wheel recessed into the centre of the mouse. Overall, it’s a pretty simple design with no crazy button configurations, but it’s certainly presentable. 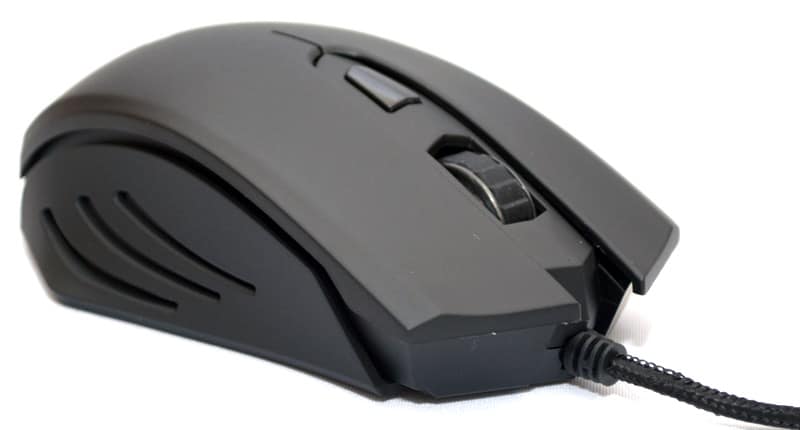 The bottom of the mouse has three slipmats to help give it extra glide on a wide range of surfaces. 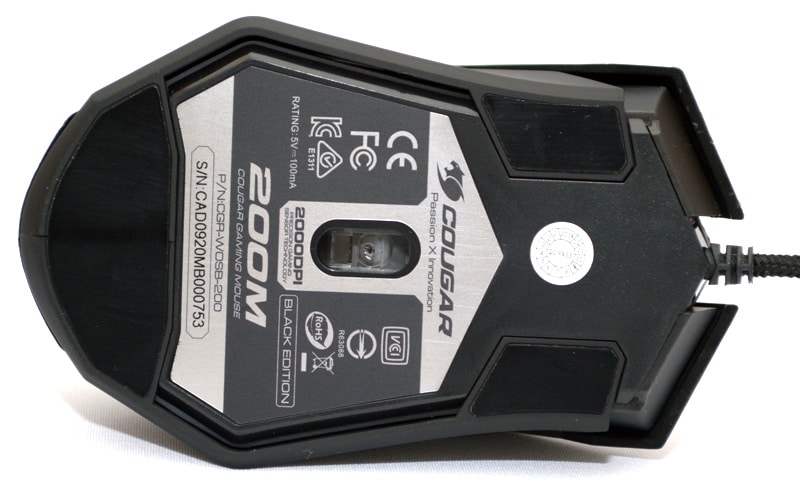 The 200K Keyboard comes hardwired with a plastic coated cable, not a braided cable like its mouse counterpart.

The keyboard has a fairly flat profile overall, with keys that look a little more like laptop keys, than typical desktop keyboard keys. They’re scissor-switch keys, which are quite similar to high-end laptop keys; a nice bridge between membrane and mechanical keys.

The keys are really nice and the low-profile key-caps gives the 200K a nice and sleek modern appearance. 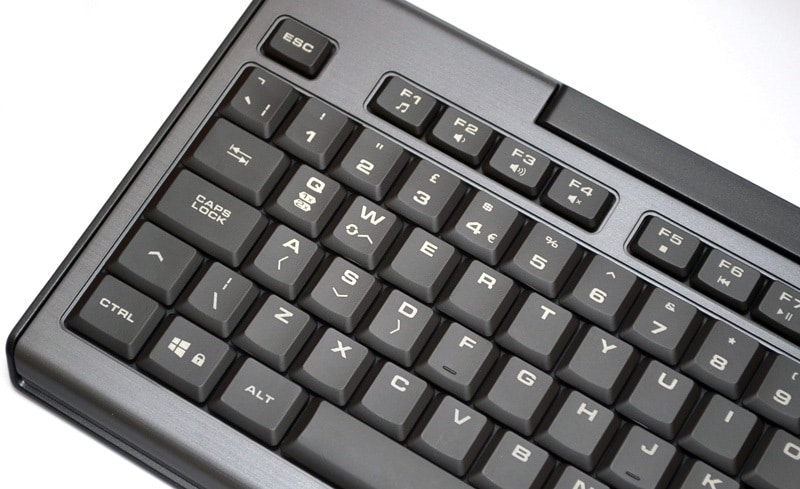 The WASD keys are highlighted with arrows, no doubt to draw focus that this keyboard is suitable for gaming. There’s a set of multimedia control functions on the F-Keys; these can be accessed via the FN-Shift key.

At the top you’ll also find a few popular shortcut keys, as well as a Windows Key lock; these are also accessible via the FN-Shift key. 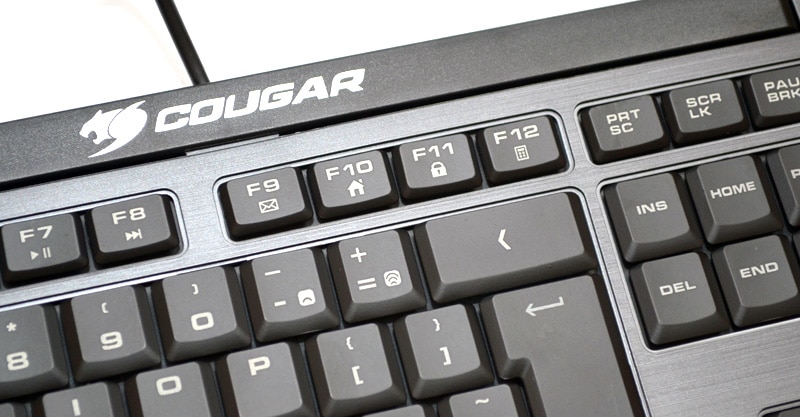 The 200K comes with LED backlighting, which can be toggled from the dedicated lighting key. 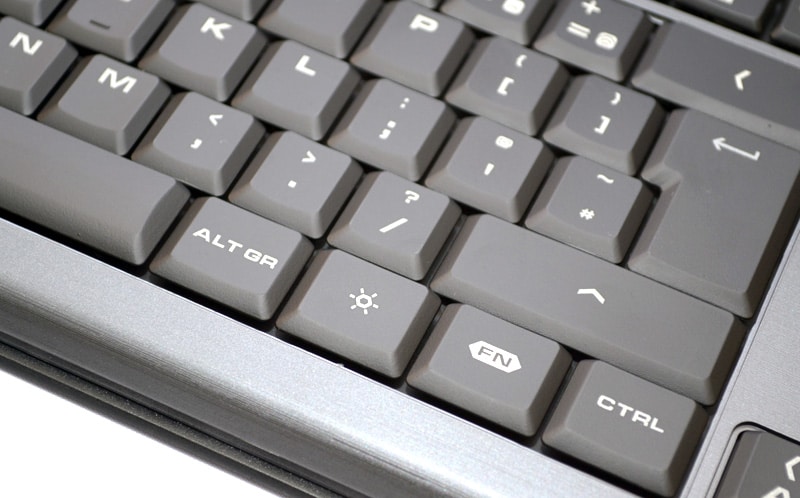 PgUp and PgDn have brightness adjustment functions for the LED backlighting. 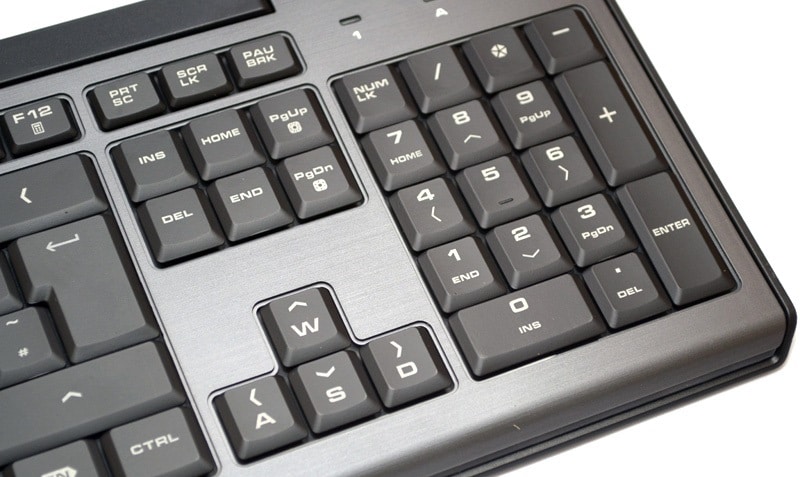 The keyboard has a super low profile and the keys are laid completely flat; most keyboards have a slight curve from front to back.

On the underside you’ll find a couple of rubber grips to help keep it from sliding around and there’s also two durable kick stands at the back.

They’re not the most outlandish looking peripherals I’ve ever tested, but they make a nice set. However, the fact that one has a braided cable (the mouse) and the other does not, is a bit of a shame and I would have also liked to see a little more of the brushed grey effect on the mouse.

The pair do look great together, with a nice orange LED light across the keyboard front edge and on the mouse scroll wheel, and logo.

The LED backlighting has three brightness levels on the keyboard, although I must admit they don’t present a very noticeable difference. What does make a big impact is the colours available; you can see all of these in the images below. 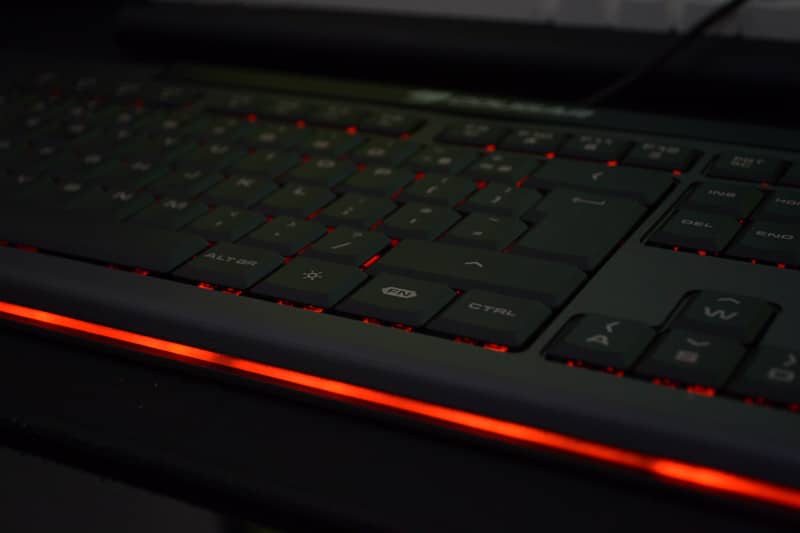 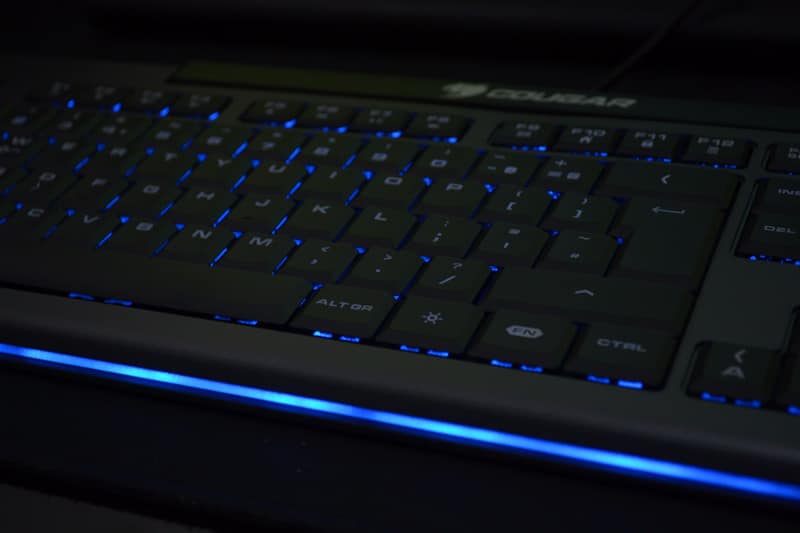 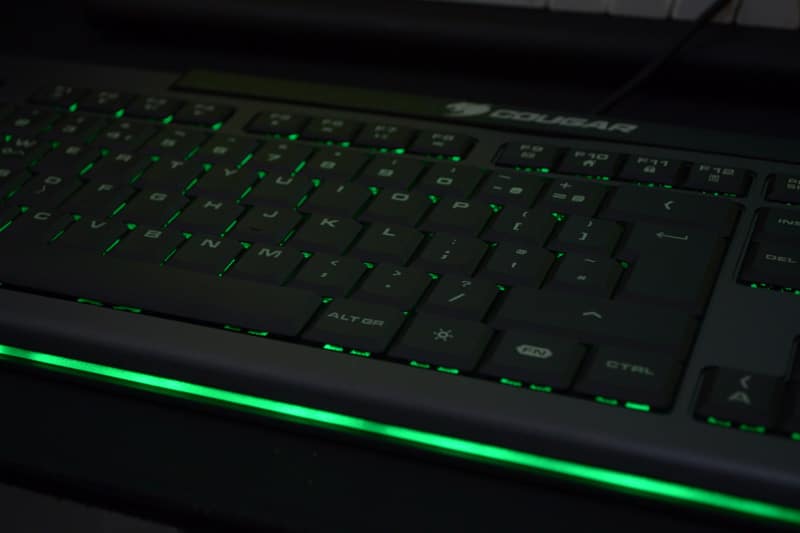 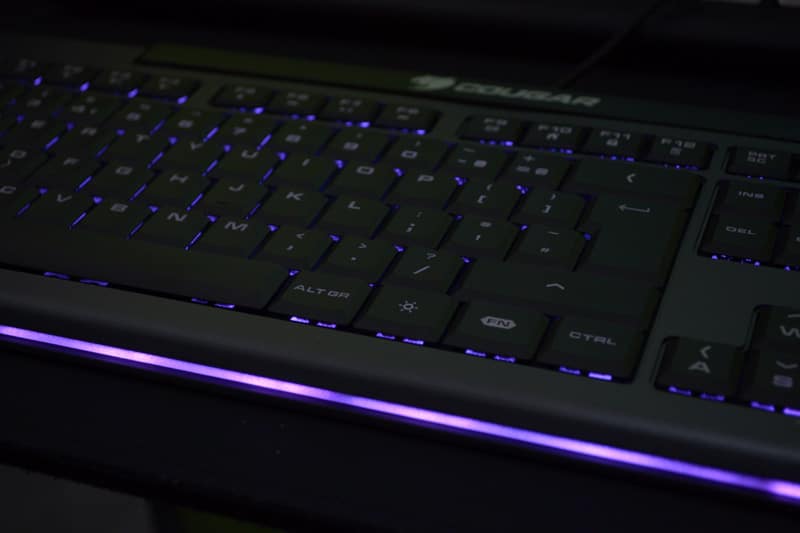 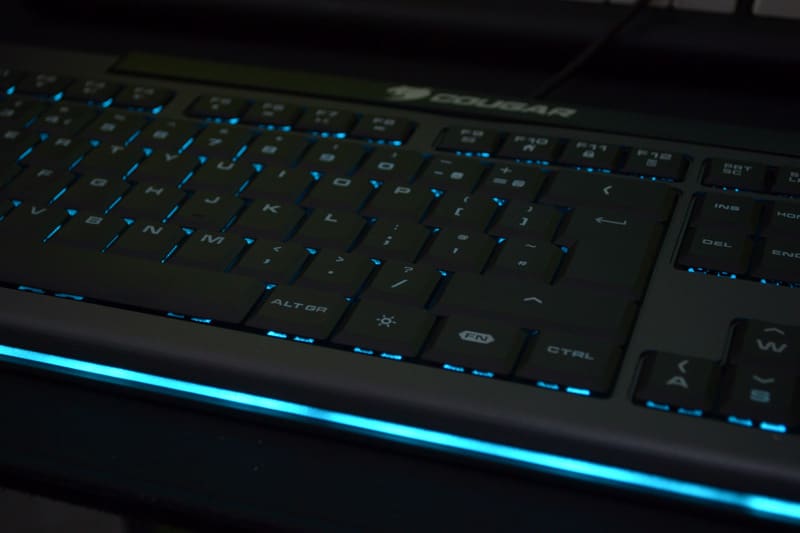 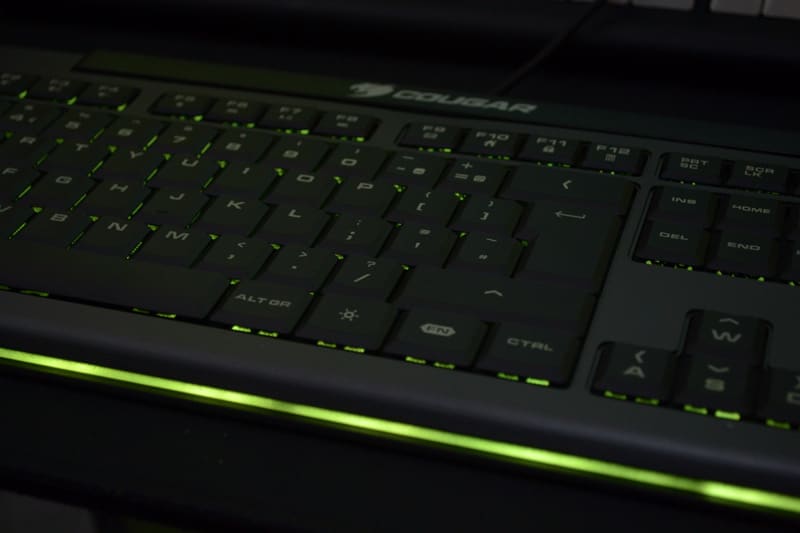 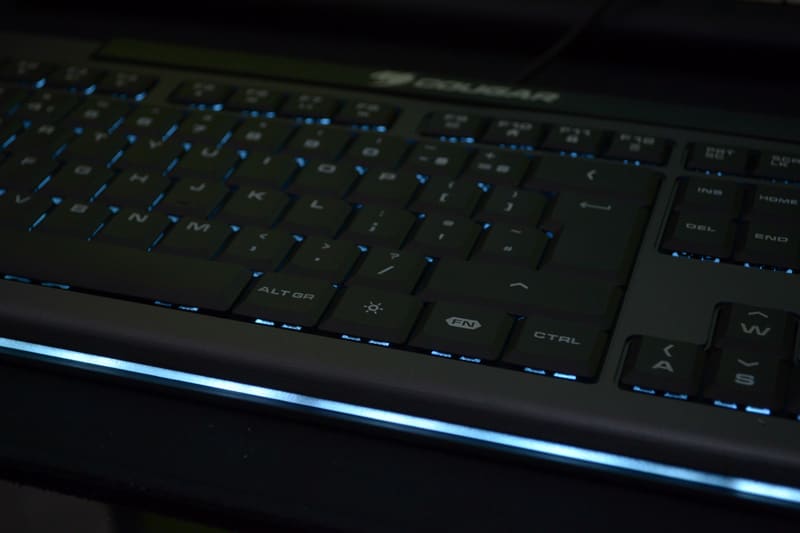