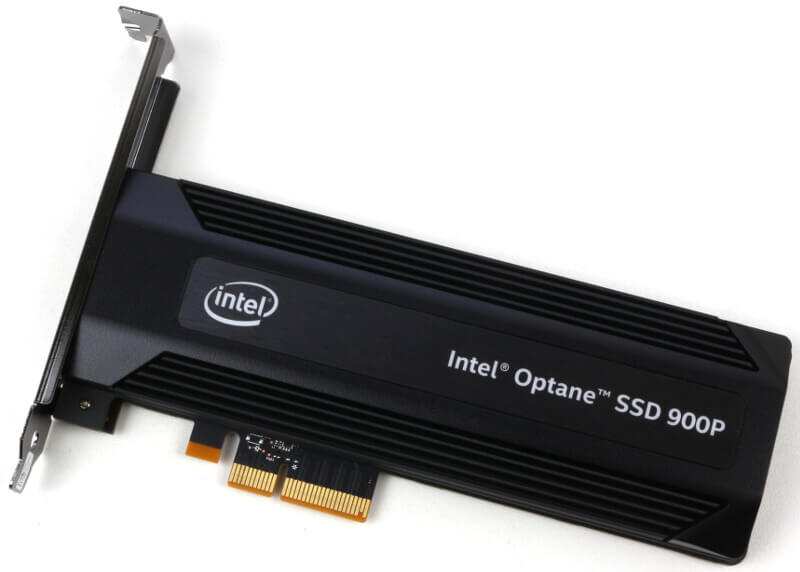 Intel launched their Optane caching modules earlier this year and now we get the Intel Optane SSD 900p as the next consumer product. The new 900p is an Optane SSD and not a caching module like we’ve seen launched earlier. It is a PCI-Express NVMe drive built with 3D XPoint NAND for an incredible experience. Today, I’m testing the 280GB version of the drive.

Intel’s products using 3D XPoint NAND are all branded within the Optane family, so don’t get them confused. The new Optane SSD 900p isn’t the same as the previous M.2 option that we’ve seen earlier this year. The M.2 module is used to speed up a slower high-capacity drive while the Optane SSD is a stand-alone device. You don’t need a Z270 or newer motherboard to run the Intel 900p.

That gives the drive a far wider reach and it becomes interesting for enthusiasts still rocking X99 or Z170 systems, for example. It is recommended to have a CPU with 3GHz or more and you’ll naturally need the appropriate connection options as well as NVMe driver support. But other than that, it’s plug and play.

The 3D XPoint technology, or crosspoint as it is pronounced, is the result of a cooperation between Intel and Micron. The Intel Optane SSD 900p is the second consumer product coming from this and it is quite the step-up from the first 32GB caching module.

3D XPoint is designed to bridge the gap between non-volatile and volatile memory. Non-volatile is slower and cheaper (SSD), but it keeps the data stored when there is no power. Volatile is faster, but it will be cleared on power-loss (RAM). The target of 3D XPoint is to eventually allow a system to run from a single set of modules instead of the current setup where you need RAM for your system and an SSD for storage. But we aren’t there, not yet.

On the surface, the Intel 900p is an NVMe drive like so many other drives on the market. The difference is under the hood and that’s the 3D XPoint NAND. The NAND design allows for faster data access due to the cross-connection build, hence the name. The random performance and low access times speak for themselves.

The Intel 900p is simply ahead of anything else we’ve tested. The closest thing we’ve seen is the Intel 750 SSD which had results 40-50% lower in random performance. The sequential performance has been close when reading, but not when writing. That is on paper, but I’m sure we’ll see results to match the expectations on the following pages. 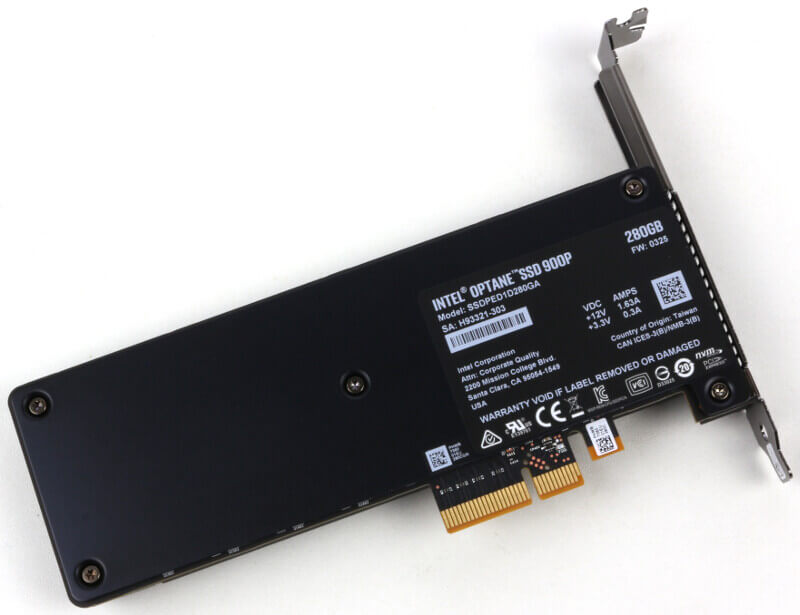 One of the great things about 3D XPoint NAND is that its performance is consistent, which shows across the various models. All of them will be able to deliver the same performance, and it’s a great one. The Intel Optane SSD 900p offers a sequential performance up to 2500MB/s when reading and 2000MB/s when writing.

However, that’s not the best part, that’s the random access performance. Here we see a rating of 550K IOPS read performance and 500K write performance. The speed of 3D XPoint NAND also shows in the average read and write latency of just 10μs (microseconds). 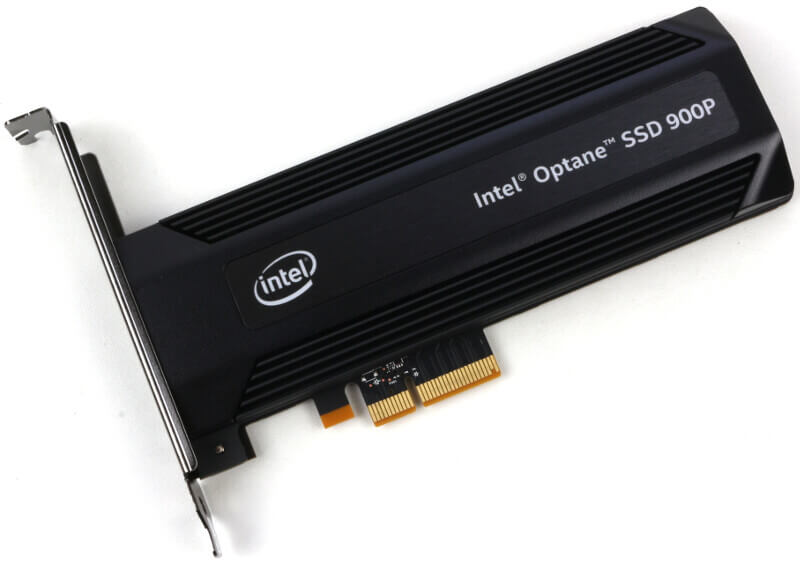 The Intel Optane SSD 900p comes in several capacities and form-factor options. There is the PCIe add-in card which I’m testing today, but there’s also a 2.5-inch U.2 version. The PCIe add-in card is an HHHL card and it comes with a low-profile bracket for use in compact systems. The U.2 version is a standard 2.5-inch 15mm drive for compatibility with drive brackets and backplanes.

Capacity wise, there is a 480GB model and the 280GB version which I’m testing today. In the U.2 section, there’s only a 280GB model at this time. These are the initial options, but Intel said that more capacity options might be released down the road. 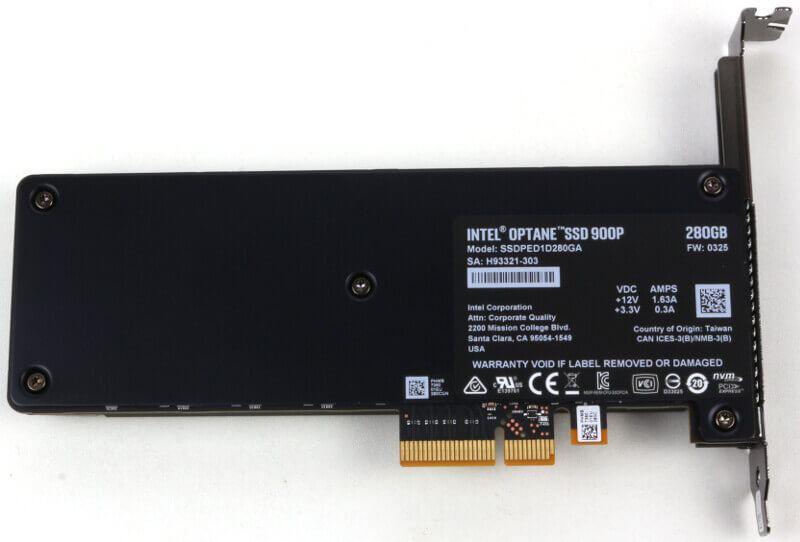 The next generation of games will require a lot more of our systems. We’ve seen huge improvements in the CPU, RAM, and GPU sector, but not so much in the storage area. Sure, we’ve seen improvements and the introduction of NVMe made a huge impact. Still, the use of traditional NAND sets a limitation that isn’t the same with 3D XPoint NAND. By using an Optane SSD, you can remove a bottleneck from your system and experience a much more fluent game.

That’s why Intel teamed up with the makers of Star Citizen for the Optane 900p launch. The game is a perfect example of the above. The large open and consistent world requires a lot of loading. If the drive can’t keep up with the data demand, then you’ll experience in-game lags or graphics that haven’t loaded when they’re shown. 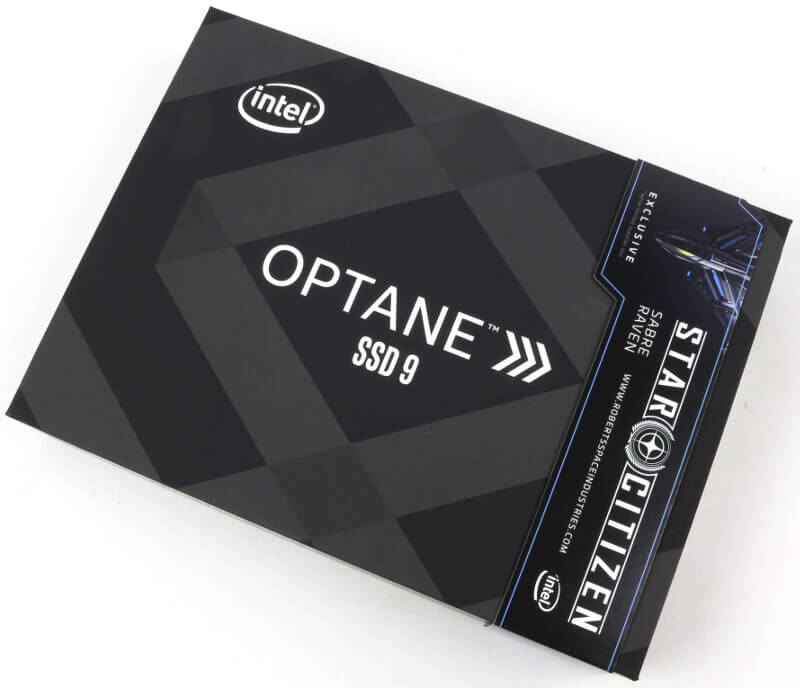 Intel’s Optane SSD has an impressive random access performance and that’s what needed. Sequential performance is nice when you copy a lot of files, but applications and games don’t load like that. Access times and random performance are key. Thanks to Optane, the game can work as the devs intended it.

As a bonus, you get an exclusive Intel ship bundled with the SSD. Don’t have the game to use the ship? No problem, you get the game too. The Sabre Raven is the fastest ship of its class, beating the stats of the normal version. That is a perfect symmetry, showing how an Optane SSD is in relation to everything else. 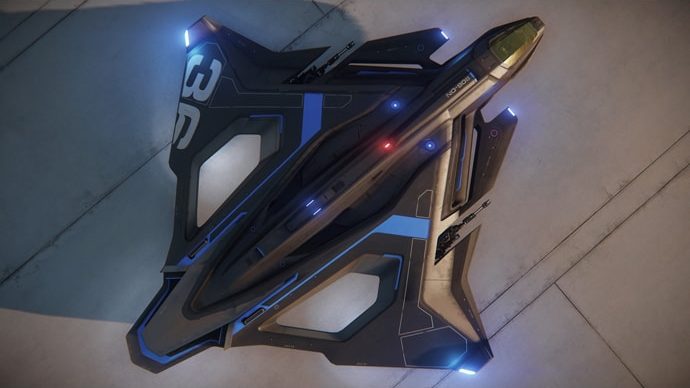 Not Just for Gaming

It would seem like the Intel Optane 900p was geared towards gamers with the included bonus content, but that isn’t the case as such. At least not completely. It is a great drive for any system, whether it’s for productivity or gaming. Any operation that requires loading and writing will benefit from the 900p.

So while the 900p is a budget-friendly drive when compared to the Optane DC P4800X enterprise drive, it offers close to the same performance. Despite a large price difference, you get almost the same drive. It’s the same controller and the same memory chips, but a different firmware and a few features less. The features that are missing, by comparison, aren’t important for end-customers, but they are for the enterprise sector. So it is as it should be. You could compare it to a Xeon vs. a Core i7 processor 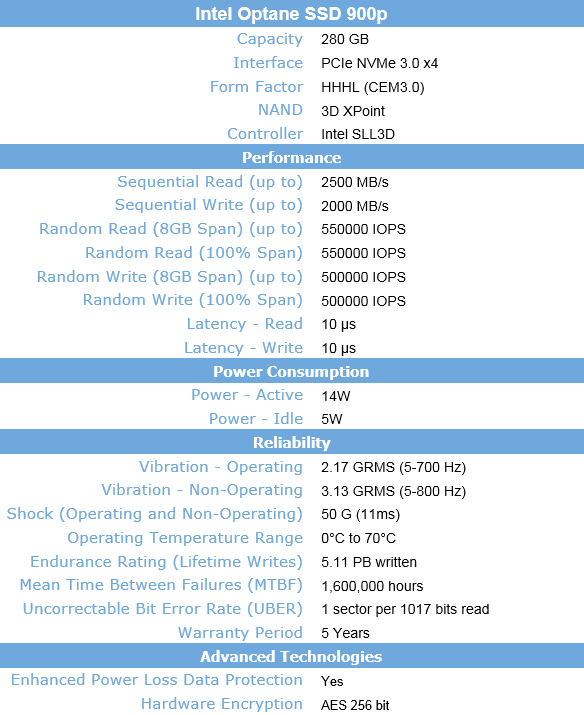