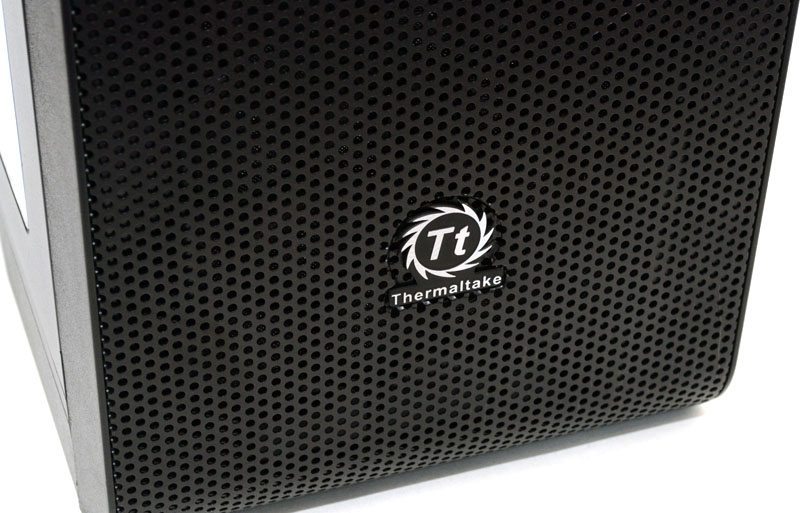 Today is a great day in the eTeknix office, as I’m very happy to have yet another high-end chassis from the legendary Thermaltake. The Core V71 was first seen earlier this year at CES 2014 and we saw it again at Computex in Taipei a couple of months ago, now we’re finally able to get hands on with this beast and put it to the test.

The Thermaltake Core V71 has been designed with customisation in mind, its capable of handing extreme gaming rigs that have been built around extreme levels of air or water cooling. It features extensive radiator support and comes equipped with three powerful 200mm fans as standard, which already sets it apart from many competing brands in terms of air cooling. Of course all the support included for high-end builds will come at a premium, as you can expect to pay in the region of £120 for this beast, but when it comes to premium grade system builds, that really is only a drop in the ocean compared to the cost of your other components such as graphics cards and a CPU. Either way, it will be interesting to see just how much return on investment you can get for paying a premium on your chassis and compared to products of a similar spec from the likes of Corsair and Fractal, it’s still competitively priced. 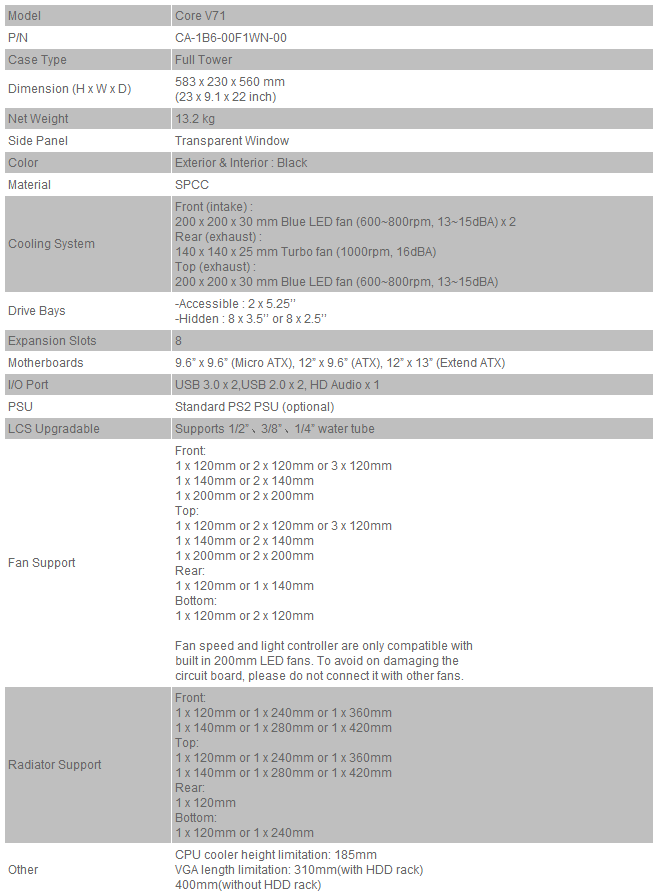 The chassis has been designed with a highly modular interior, with fully removable hard drive bays, two storage stealth mounts behind the motherboard that support 2.5″ or 3.5″ drives, extensive water cooling and radiator support, room for ATX motherboards, large power supplies, plenty of cable routing space and more. First up we can see on the two charts below just how extensive the cooling support is on the V71, with room for two radiators up to 420mm in length and a multitude of smaller ones in various configurations and an equally vast array of fans. 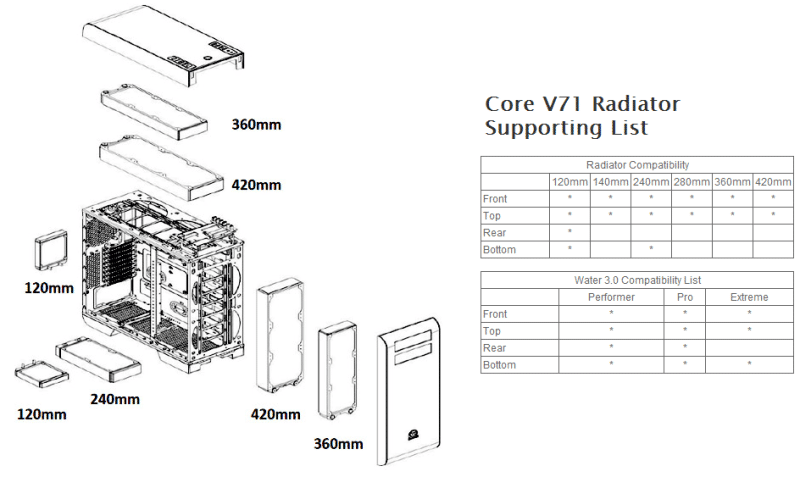 The V71 comes fitted with one 140mm rear fan and three 200mm fans as standard, one on the top and two in the front, but there is still room for a fourth should you really want some thundering airflow. 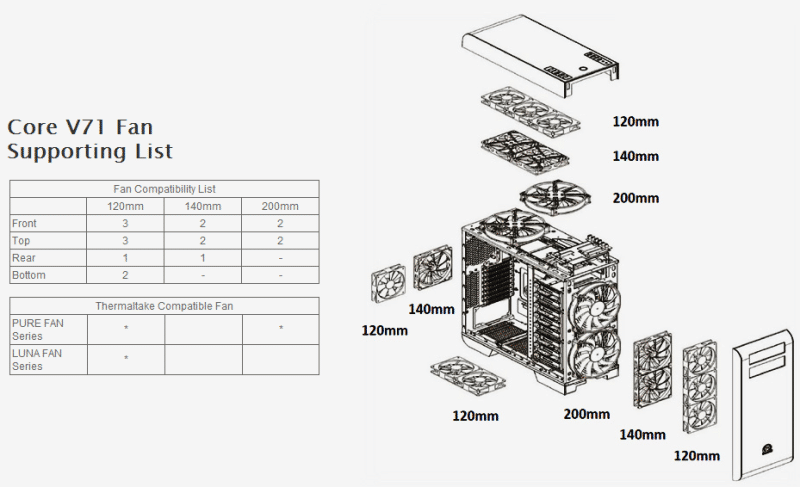 The box is pretty standard with a high contrast image of the chassis on the front and the full specifications down the side. Nothing fancy, but at least you know your budget isn’t being wasted on a fancy box. 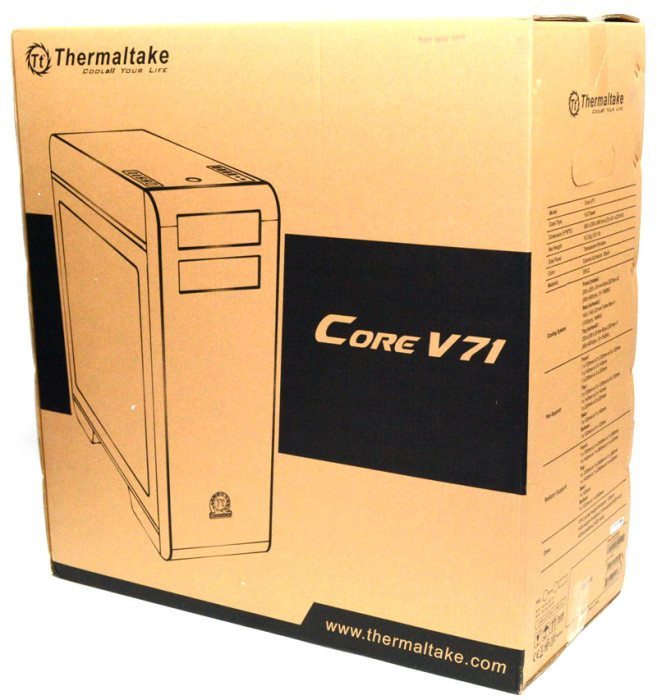 In the box you’ll find everything you need to get you started. An internal speaker, some cable ties, all the screws needed to install a motherboard, PSU, hard drives, GPU’s etc, as well as a 4+4 pin motherboard extension cable and a simple installation guide. 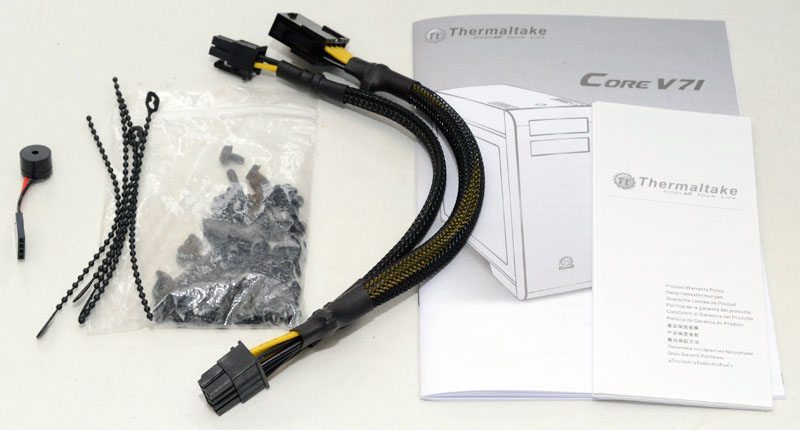