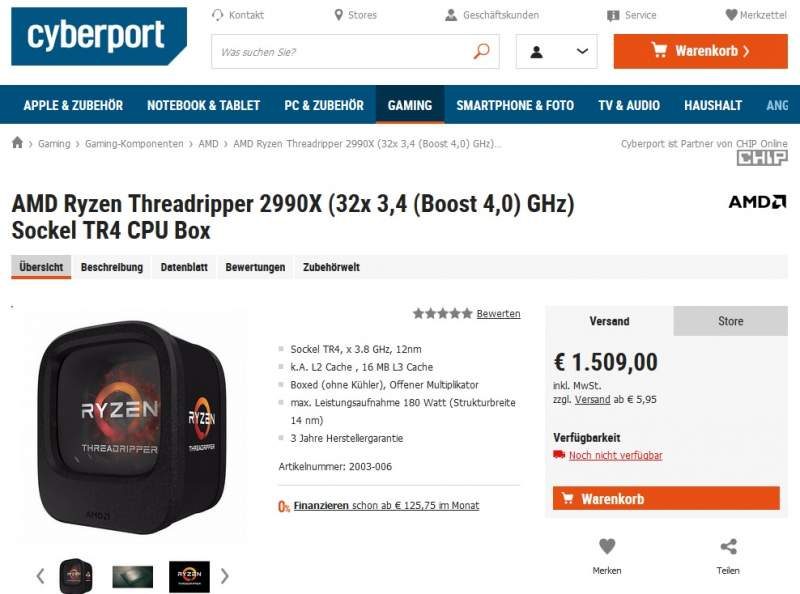 Earlier last week, benchmarks of the 32-core AMD Ryzen Threadripper 2 processor surfaced. This model is the expected top-end Threadripper 2990X which has a total of 64-threads.

Now the processor has been spotted on a German retail web store Cyberport.de with a list price of 1509 EUR. That is certainly quite pricier than existing Threadripper processors. However, considering it doubles the core and thread count of the Threadripper 1950X, it only makes sense.

When is the AMD Ryzen Threadripper 2 Coming Out?

AMD promised a Q3 2018 launch date during the Computex 2018 keynote announcement. Initial expectations point towards a later September launch. However, if it benchmarks are leaking out now and stores are listing it, the next generation Ryzen Threadripper CPUs might be launching a month or two earlier than that. Q3 2018 begins in a few days, so the waiting time is not going to be long.

The AMD Threadripper 2990X will slot in with existing TR4 socket X399 motherboards. The best news from the early benchmark leak last week is that the CPU overclocks to 4.12GHz at 1.38v with only a Corsair H150i PRO AIO. No delidding required.