AMD Shows Off Ryzen 3 and Zen 2 at CES Keynote 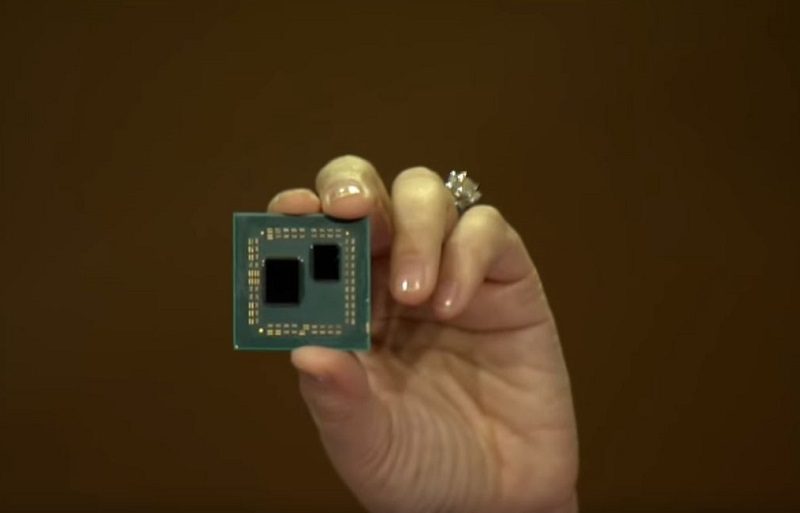 During their CES keynote today, AMD revealed their new Radeon VII graphics card. Beyond the new Vega 2 GPU, the company also talked gaming. Key to the company gaming push is, of course, a strong CPU. As part of the gaming package, the Ryzen CPUs are a key part already. Moving into 2019, the company is expected to launch the new Ryzen 3000 series. At the keynote, AMD showed off a new Ryzen 3 CPU.

Near the end of the keynote, AMD showed off an unnamed 8 core 16 thread Ryzen 3 CPU. Due to the new Zen 2 architecture, the chip offers a highly impressive IPC increase. Compared against the Intel 8 core 16 thread Core i9 9900K, in Cinebnech R15, the Ryzen manages to eek out a win. It scores 2057 points against the 2040 of the Intel. Furthermore, the chip was not running at its final clock speed, so performance could still increase. More importantly, system power was only about 133W against the 179W of Intel.

With these numbers, it looks like AMD has managed to catch up to Intel’s Coffee Lake architecture in terms of IPC and even surpass it. This is a major boon compared to the approximately Broadwell/Skylake performance before. Even though Intel is launching Sunny Cove later this year, Ryzen 3000 and Zen 2 should be up to the challenge. This should maintain competitiveness at about the current levels unless Sunny Cove is really amazing.

Beyond the chip, CEO Lisa Su also revealed some other key features. Despite earlier rumours, it looks like Ryzen 3000 will use the chiplet design. The 8 core chip features a 14nm I/O die and 7nm CPU die. There is also enough room for an additional 8 core CPU for a 16 core package. The new chips also retain AM4 support but add PCIe 4 support, dependent on the motherboard of course. Finally, the new chips will arrive in Mid 2019.